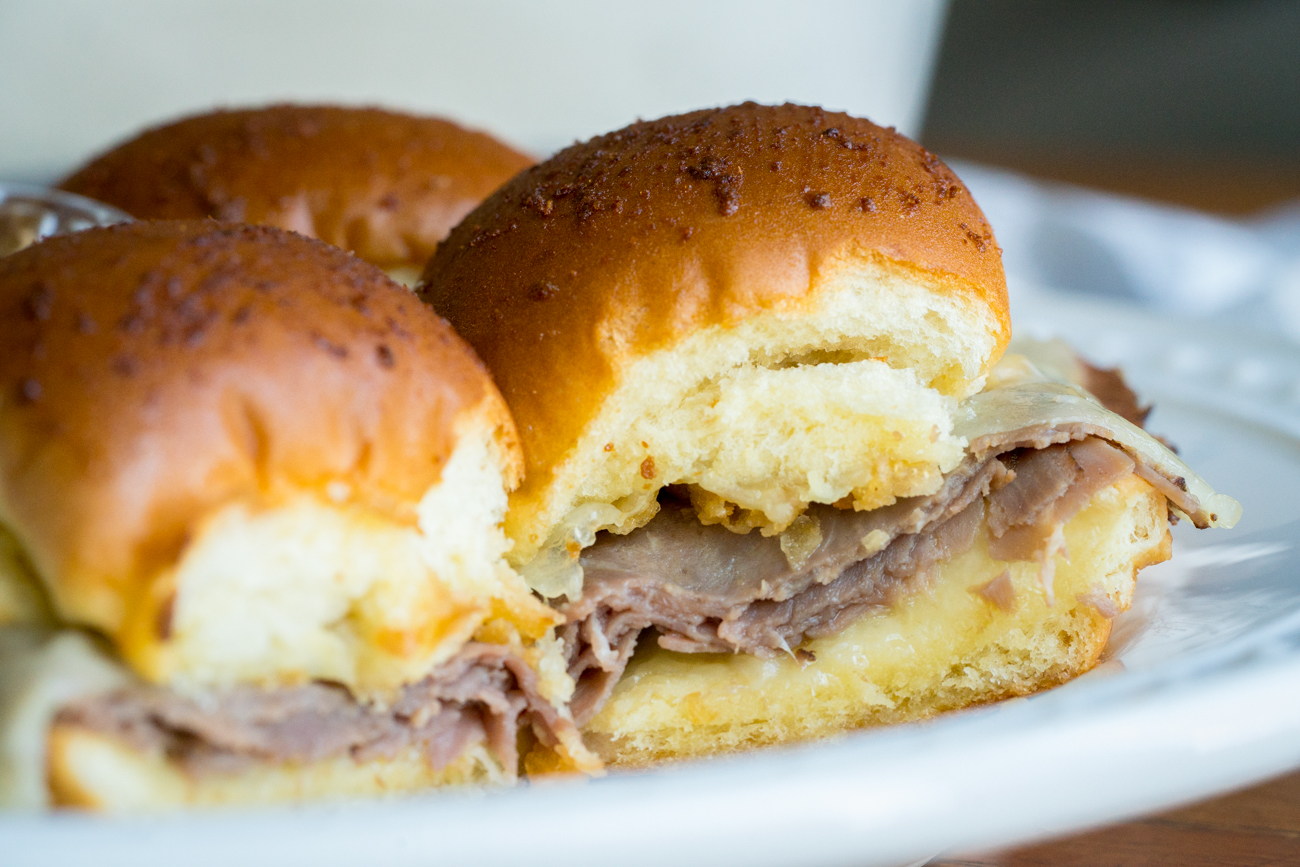 Sandwiches are the best. They’re basically like an entire meal in a nice little package, and there’s usually cheese involved. What I’m saying is, they’re incredibly easy to love. That being said, I’ve always been partial to the French Dip, because well, it’s a sandwich that you get to dip. And a sandwich + dip is a happy marriage. It’s hard to believe that lunch could get any better! Until you meet this super simple slider version, that is. With sweet Hawaiian rolls as your base, you can make twelve little French Dips all at once in a single pan and you can make ’em ahead if you need to. (How’s that for the perfect party app?) 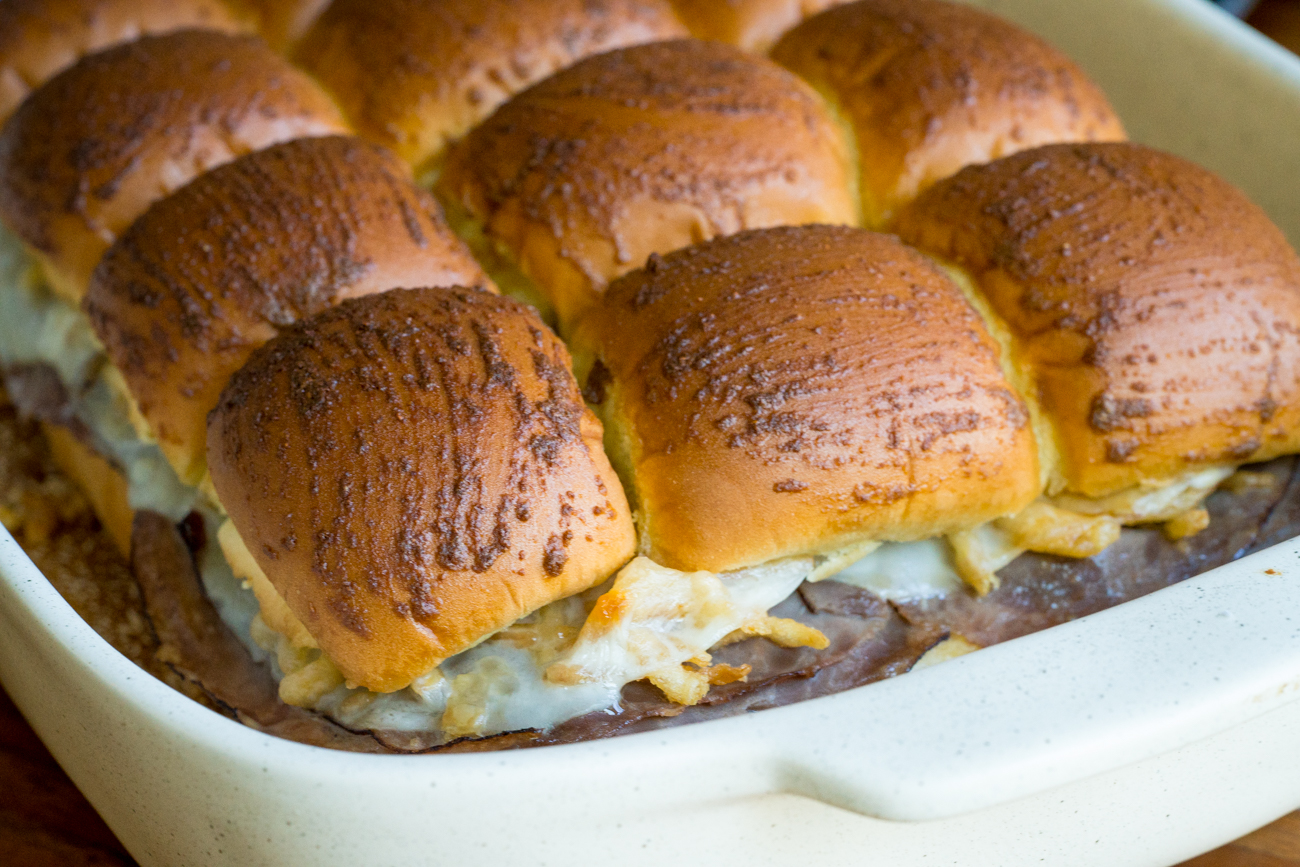 So I’ve already told you these involve Hawaiian rolls (which are soft and sweet and the perfect contrast to the savory roast beef and dipping sauce), but how you’ll want to lay them out is also important. Basically, you want to cut through the entire package of rolls, separating the tops from the bottoms but keeping them connected to each other. (Think of it like you’re making one giant sandwich. Don’t worry, you’ll cut it apart at the end.) 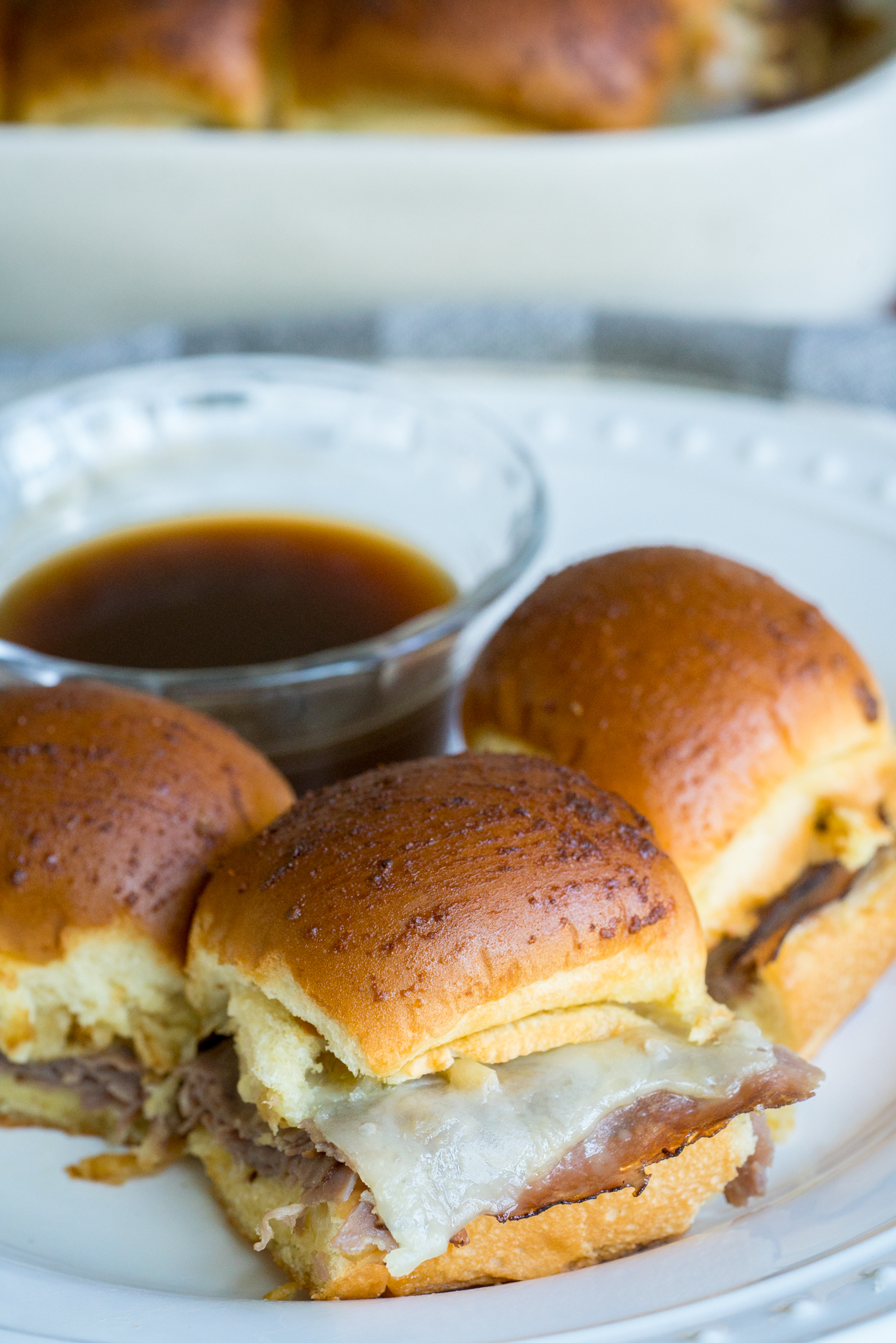 You lay the bottom section of rolls down in a buttered baking dish, and start your layering. Thinly sliced roast beef goes on first, and then some provolone, and then crispy French fried onions. Now, maybe you’re not accustomed to seeing fried onions on a French dip, but trust me, it’s an excellent addition. The top section of rolls go on, and then a quick mixture of butter, au jus seasoning mix and a few extras gets poured over the whole shebang. 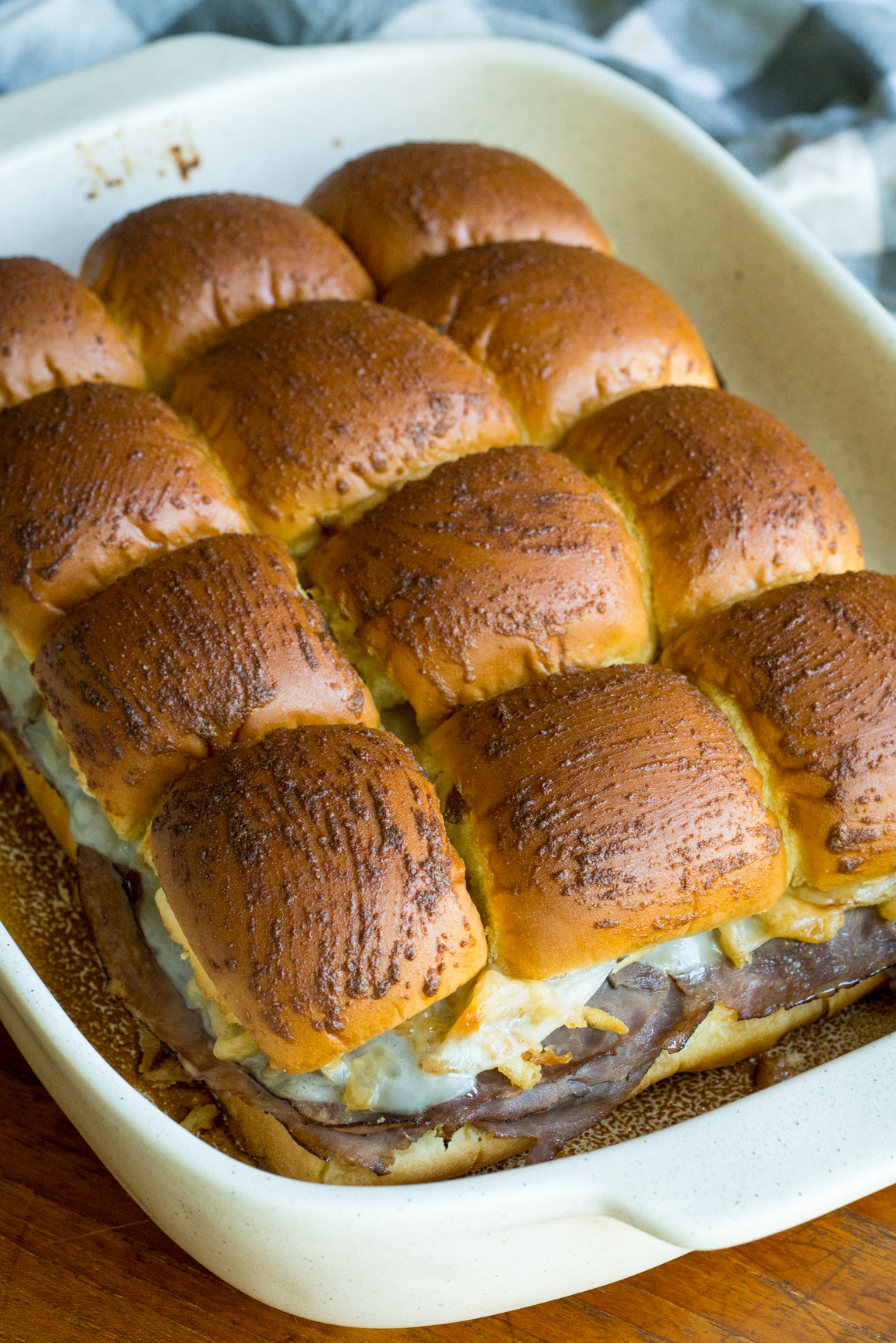 Now, you could make your sliders ahead up until this point. If you wanted to, say, make them the night before and bake ’em up before a big party, you’d just cover the pan with foil and pop it in the fridge until you were ready to bake. The sauce sinks into the rolls when done this way, basically bathing them in flavor, but they crisp up nicely when they cook. 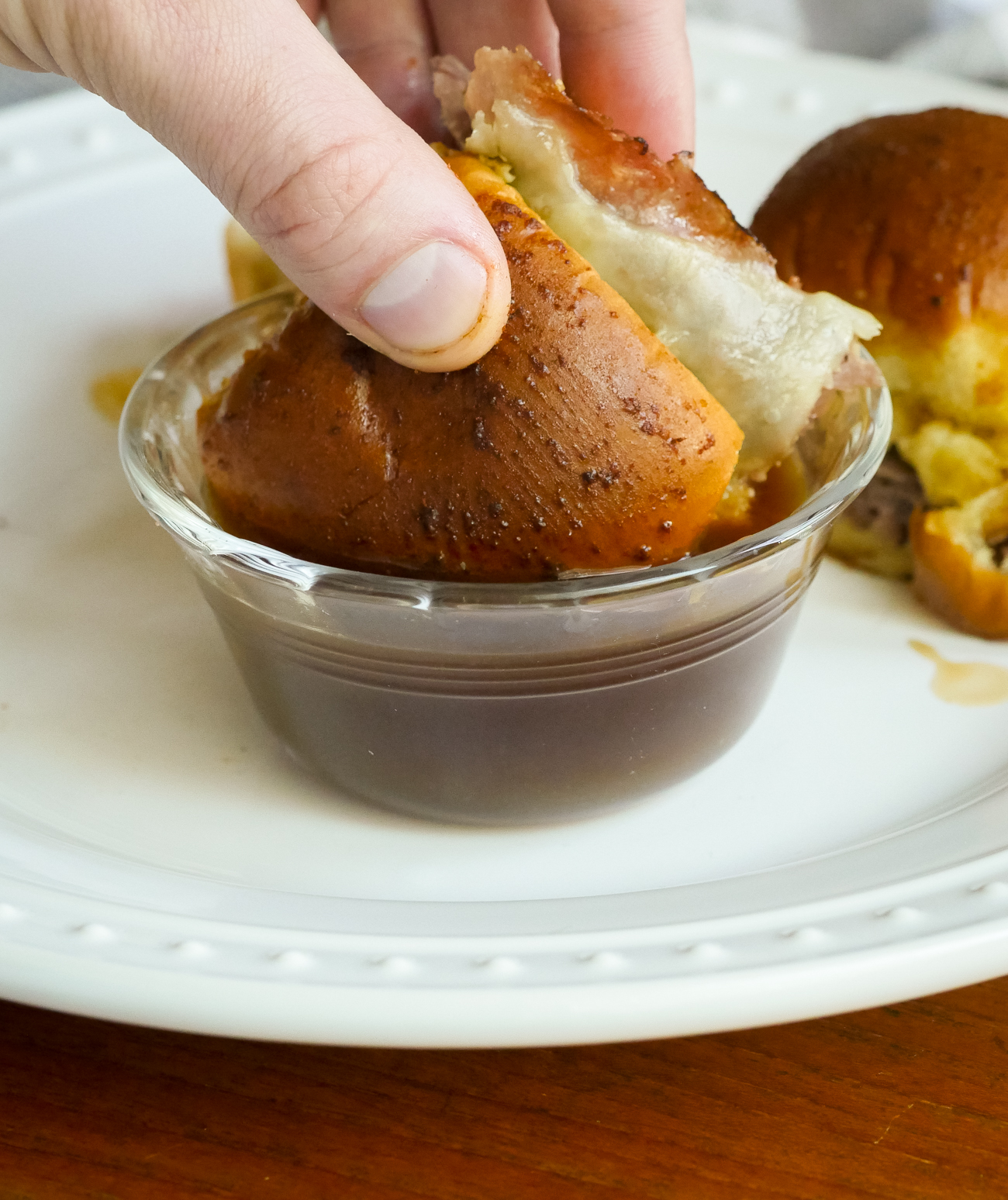 The sliders head into the oven just long enough for the cheese to melt and the flavors to meld, which gives you a moment to mix up the au jus dipping sauce. Once they’re out of the oven – a little crispy on the edges and warm throughout – all you have left to do is slice those little guys apart, give them a dip, and enjoy. (Whether or not you share is up to you.)