During World War II, rationing in many parts of the world reached crucial heights. However, in the U.S. rationing was comparatively mild, with some foods on the ration easily substituted for similar ingredients. So-called “sugarless” cakes at the time might have used corn syrup or honey instead of sugar which was a far cry from other countries in which one cake would have taken the sugar or honey ration for a week from an entire family. Even with the relatively unobtrusive U.S. ration, the government created cookbooks, posters, and even held cooking classes to show Americans how to use less of foods that were needed for the troops. 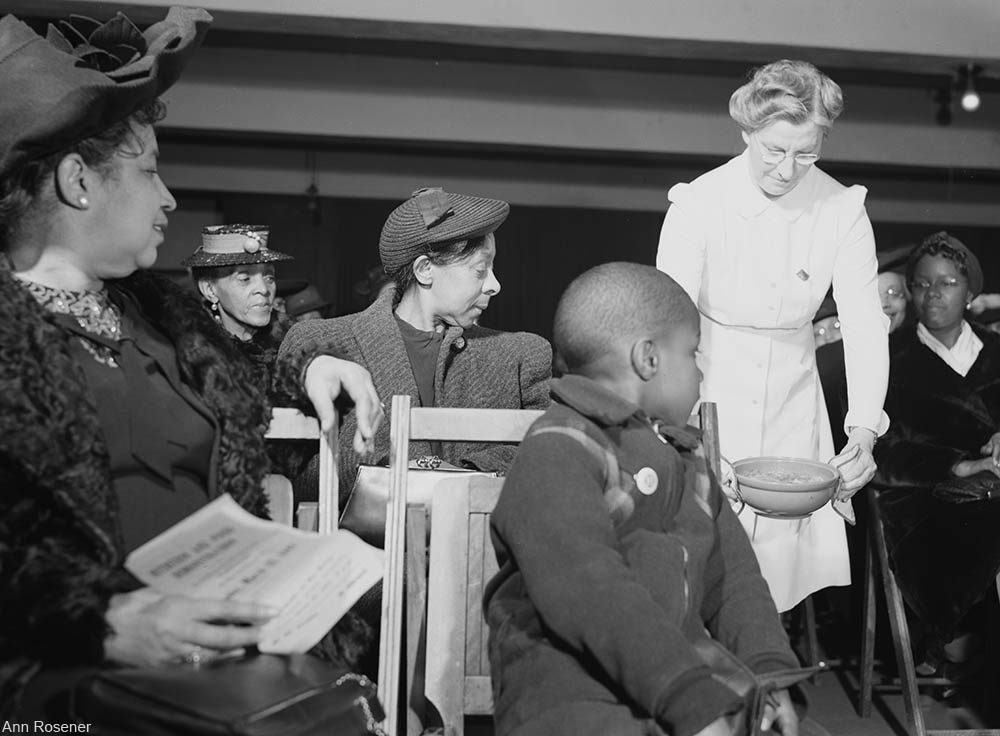 Original caption: “Wartime food demonstrator Alice Burtis exhibits an “extended” meat loaf at a Washington, D.C. consumer meeting. In such gatherings now being held throughout the country, housewives are learning best methods of wartime cooking and buying.” Via/ Library of Congress

The Wartime Food Demonstration program offered a variety of resources so that housewives could learn how to feed their families with dishes that were not only wholesome, but also part of their usual fare. This way, the hope was that everyday folks would not feel put-out by the rationing system.

The program also focused on reducing food waste and preserving food for as long as possible through canning, cooking, and proper storage. Whether on the ration or not, the food stuffs that Americans did have needed to be stretched in order to give the armed forces the best chances of winning. 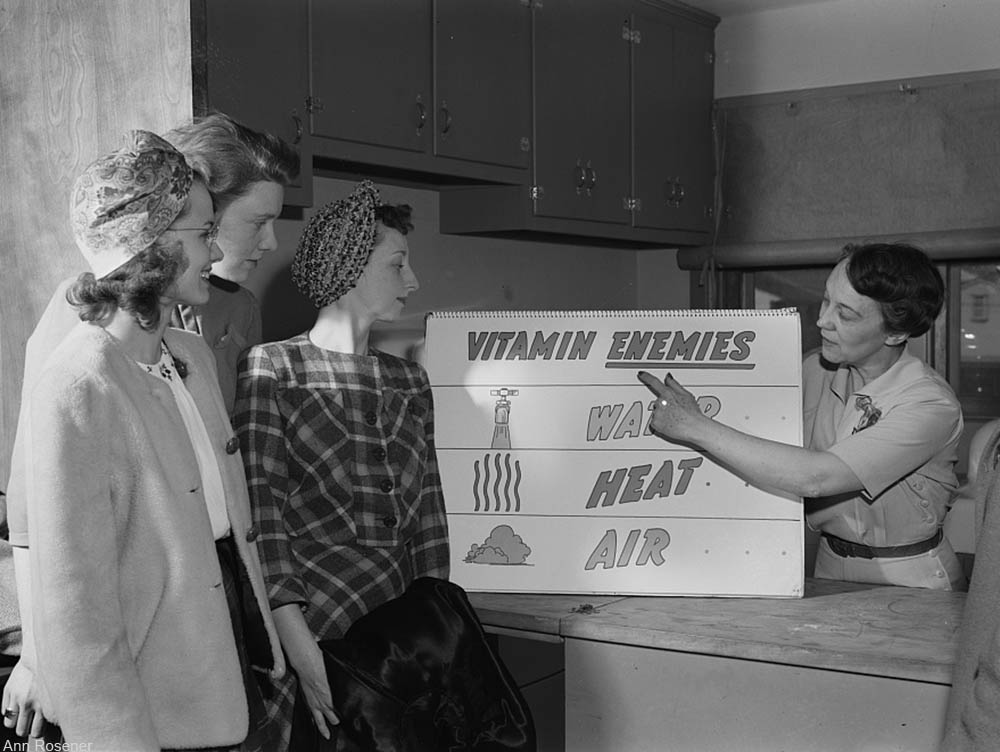 From the original caption: “Participants in a wartime food demonstration, Mrs. Harry Weiner and Mrs. M.L. Caudle, wives of Alexandria, Virginia torpedo plant workers, find an enjoyable conclusion to the demonstration where sugarless, butterless cake was the day’s example of wartime cooking.” Via/ Library of Congress

Classes offered by experts in cooking and home economics were offered at schools and other public spaces, attended almost entirely by women. Sometimes they even got to sample the products so that they would know how they should taste. 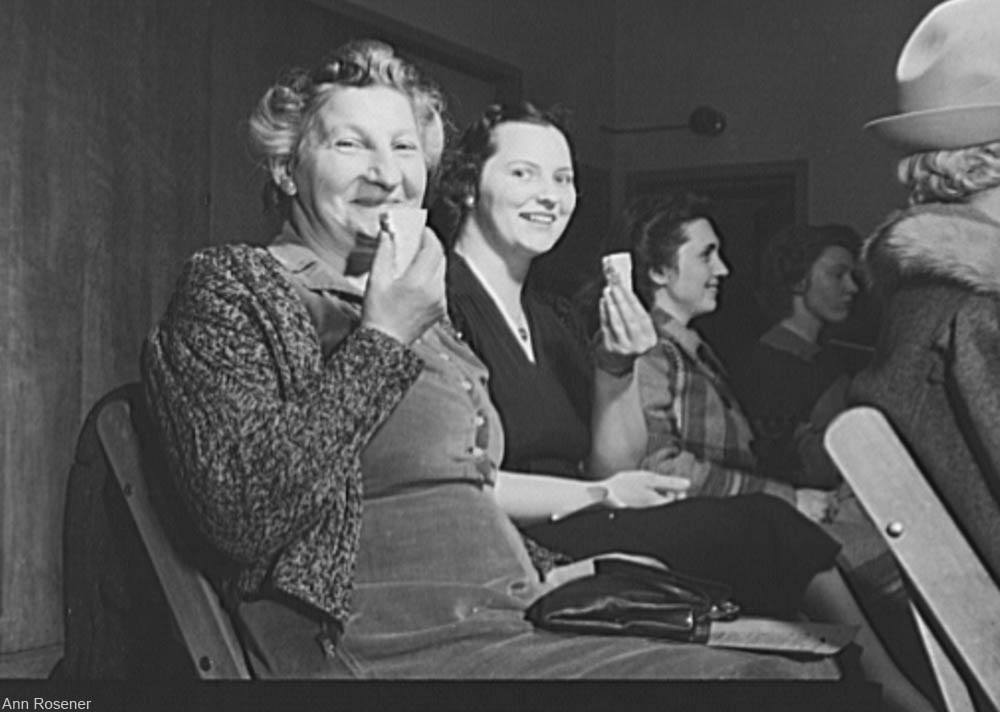 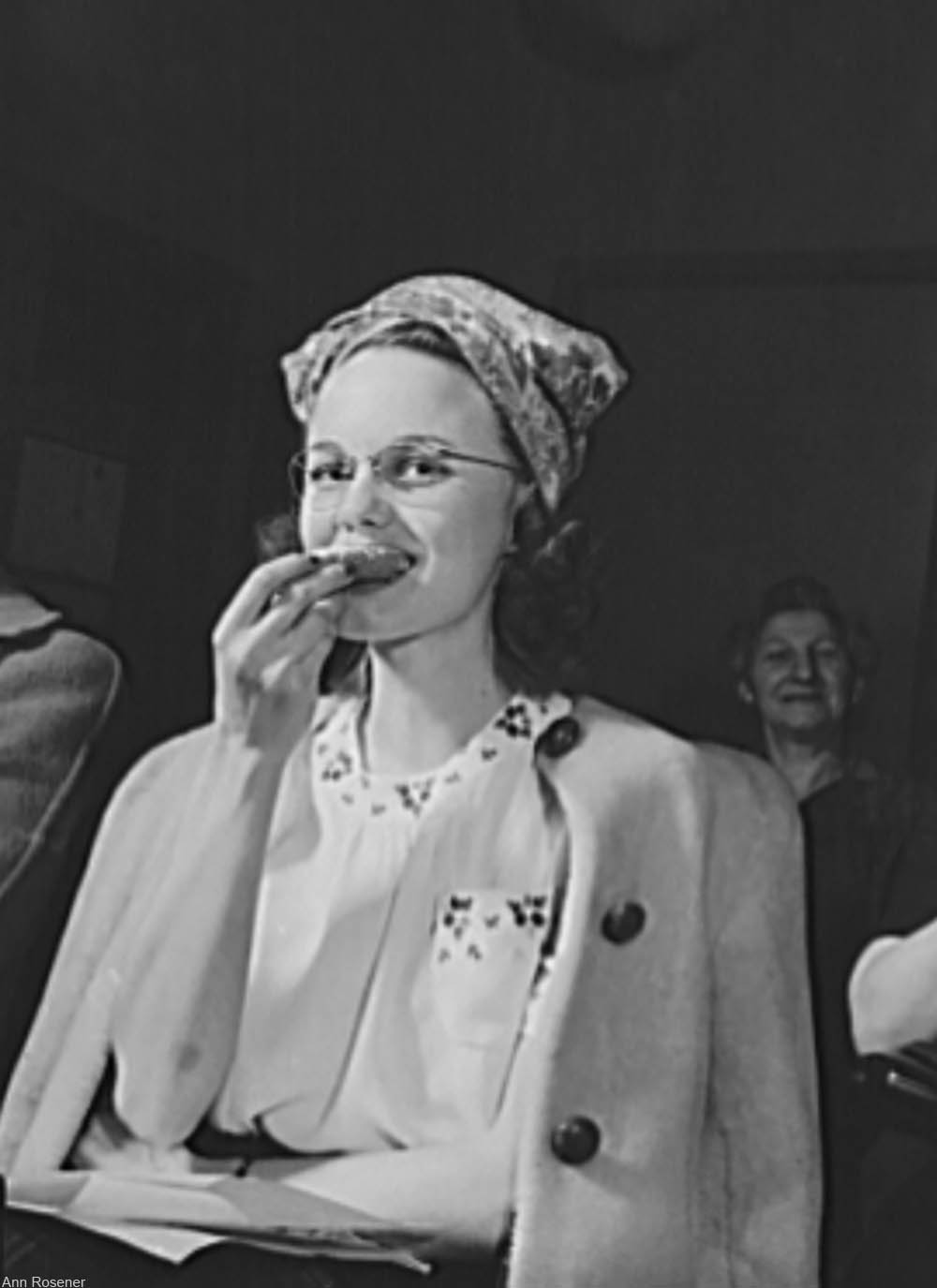 Original caption: “Made without sugar and butter, this piece of cake is nevertheless delicious if Mrs. W.L. Sommer’s expression is an indication. The cake was baked for a wartime food demonstration in Alexandria, Virginia.”Via/ Library of Congress

Teachers of these classes were referred to as “demonstrators”- much different to how we use the word today! The guidelines for creating demonstrations were laid out for city or county officials who then had to source committee members, locations, funds, and teachers to complete the program.

Classes were intended to be offered in every area, by block, city, county, or school district depending on the population density and need.

According to the handbook for these classes, created by the Office of Defense Health and Welfare Services, the demonstrators should have been drawn from the following figures, “Those having just finished nutrition courses for lay people, including 4-H club members and other juniors.” Also included in the list were those who had completed home economics classes, members of agricultural groups, butchers, and experienced homemakers among others. 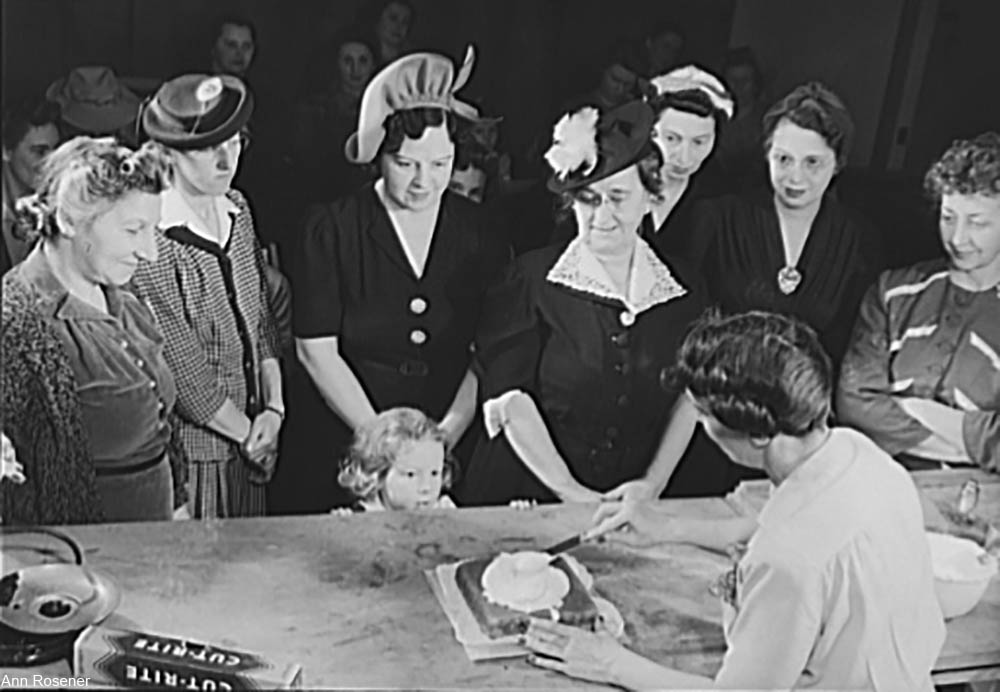 Original caption as follows, “Demonstrating how to make a butterless, sugarless cake, home economist, Ida Lansden combines substitute ingredients before an interested group of Virginia housewives. Small groups like this are meeting daily throughout America to learn wartime ways to buy and cook, under supervision of competent nutritionists.” Via/ Library of Congress

Sugar was the longest-rationed U.S. foodstuff during the war, having been restricted from 1942-1947. This meant that baking was an especially important focus of the demonstrations. The U.S.D.A. Extension service had set up communal canning centers across the U.S. where classes were offered on how to prepare and can home-grown foods. Those who canned during the war could apply for an extra 20 pounds of sugar for the specific purpose of canning, though they were not always granted this allowance. 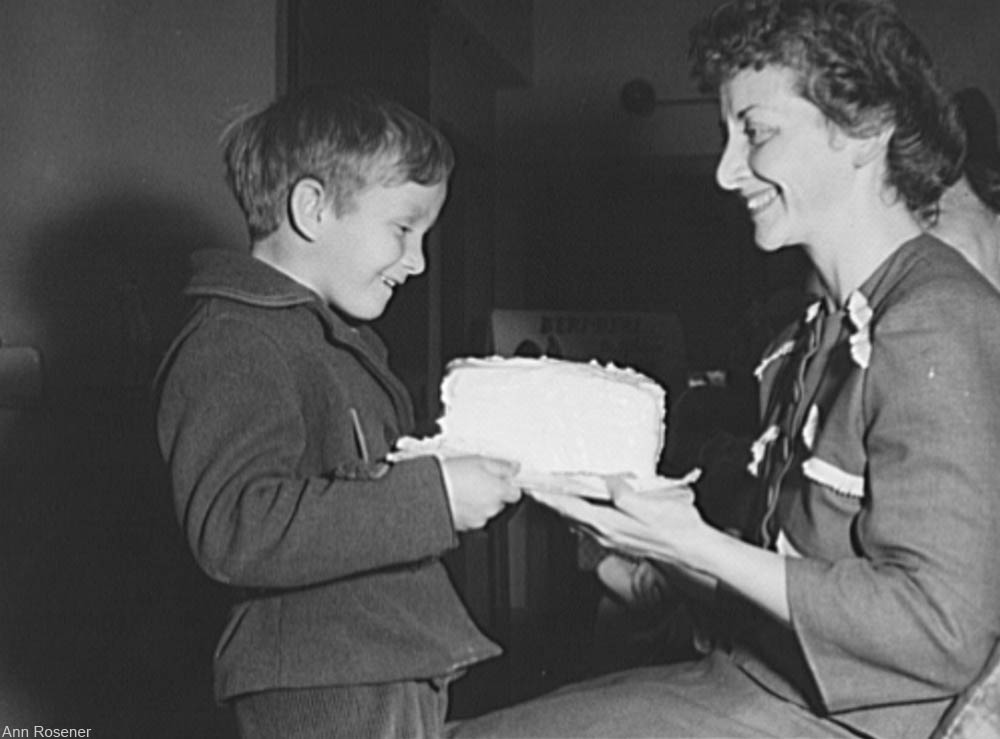 After this particular class, half of the ration-friendly cake was raffled off. Via/ Library of Congress 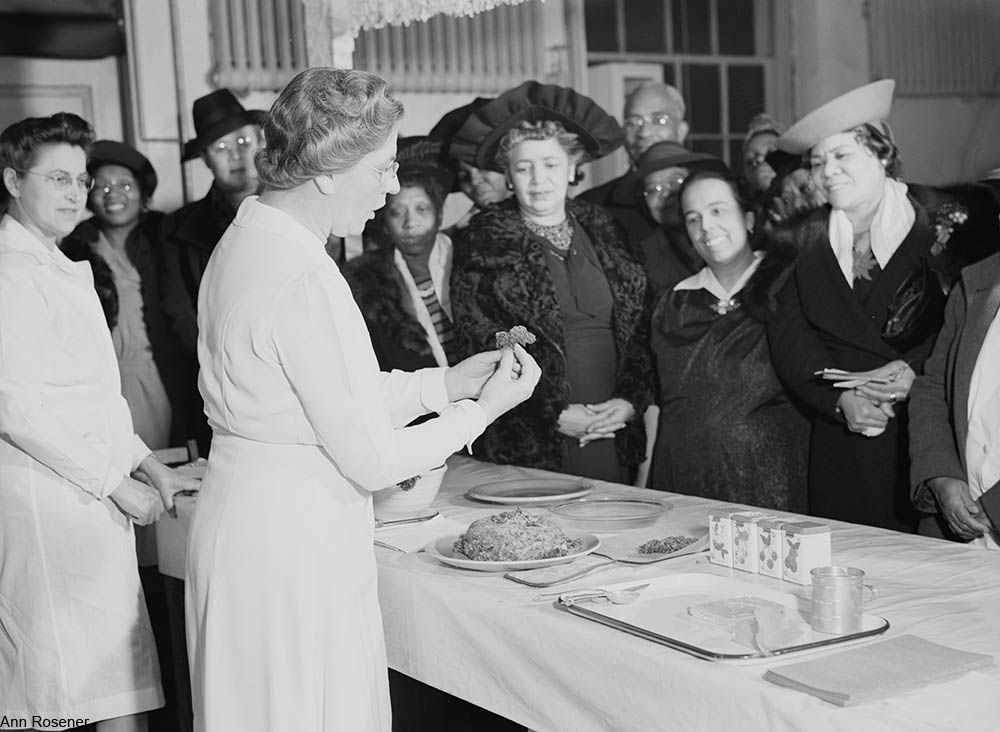 This class in Washington D.C. was on how to “extend” meat recipes with fillers like beans or corn. Via/ Library of Congress

The government was so involved in people’s lives during the war because without public campaigns to buy war bonds, start victory gardens, save food, or donate rubber and metal to scrap drives, the result would have been a much less-efficient nation at war and this was something we could not afford if we wanted to win over the Nazi regime. Making a sugarless cake may have only been a drop in the bucket, what it’s part of what helped the Allies attain victory.