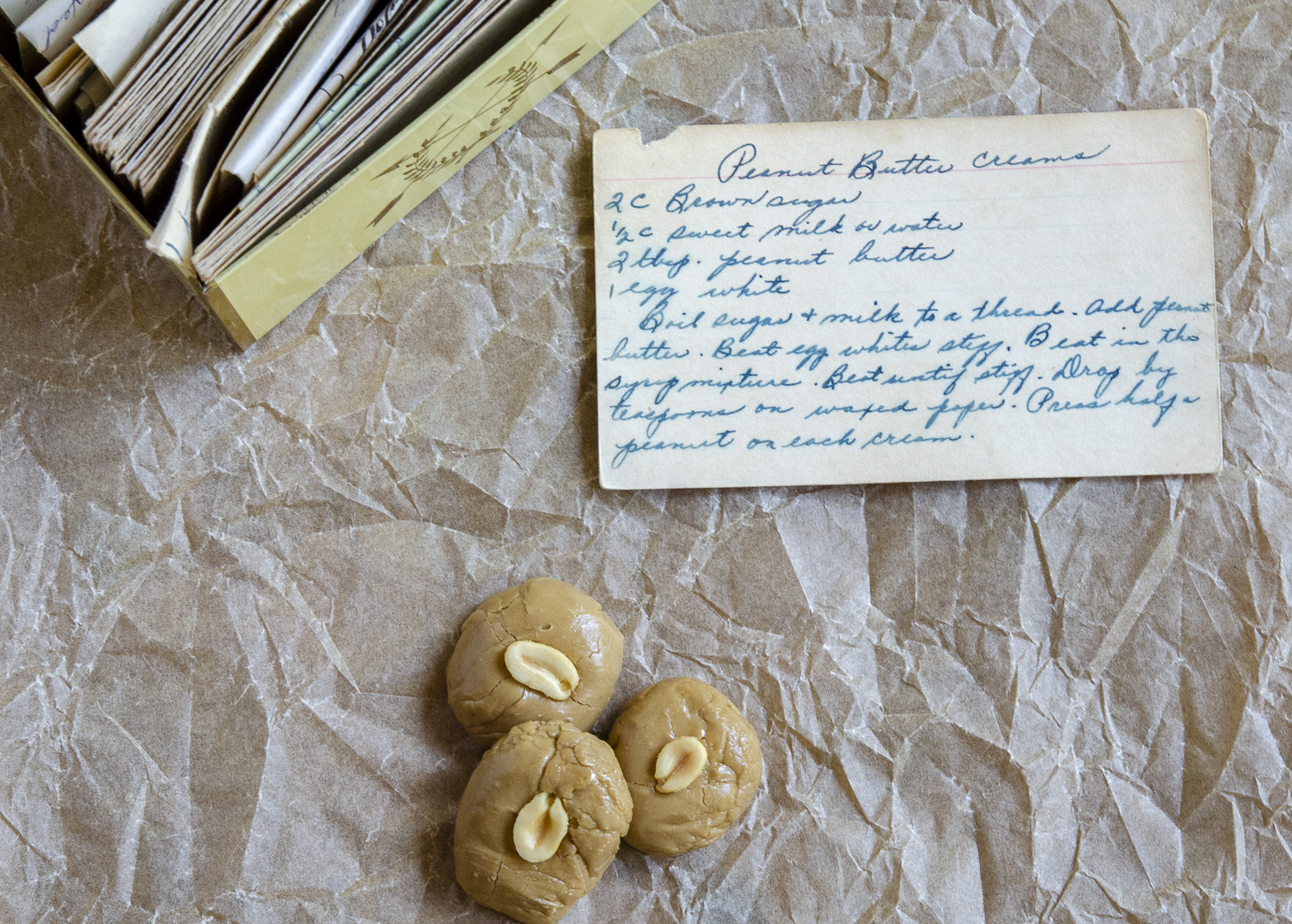 When I found this recipe in a stack of vintage recipe cards, I wasn’t even sure what a Peanut Butter Cream was. I’m still not. The card gave very little to go on, and an internet search even less, so when I started making them I had no picture in my mind of what I’d end up with. It was a candy – I knew that much – and I assumed it would be soft and sweet and nutty, and on that front I was entirely correct. It’s a lovely old-fashioned candy with a little bit of chew and a lot of great flavor.

This recipe card came out of an old recipe tin that I recently found and started cooking my way through. I call it the Recipe Tin Project. It’s chock full of old recipe cards, most of which seem to be from the ’60s and ’70s. I love food history, and the idea is to breathe new life into these recipes from the past and maybe learn a technique or two from them along the way. There are everlasting classics in there like Carrot Cake and some not so timeless creations like Jellied Chicken Gumbo. 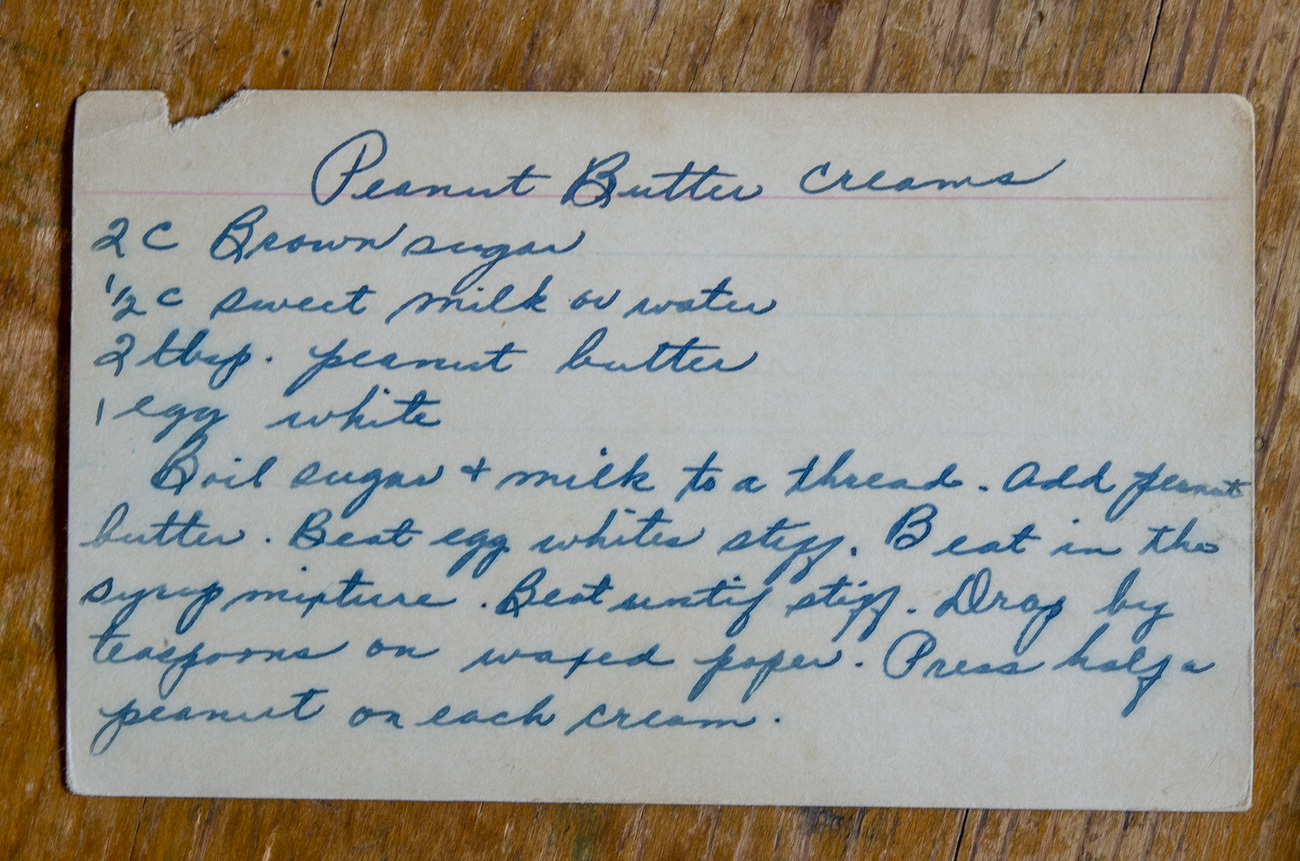 There are cards in that stack decorated with chickens and houses and teacups and wood cooking stoves, but this plain index card is one of my very favorites. I love the beautiful blue cursive and the way the card is well-worn – corners now rounded, the words swollen here and there from spills of water, a soft but small tear in the top left corner. 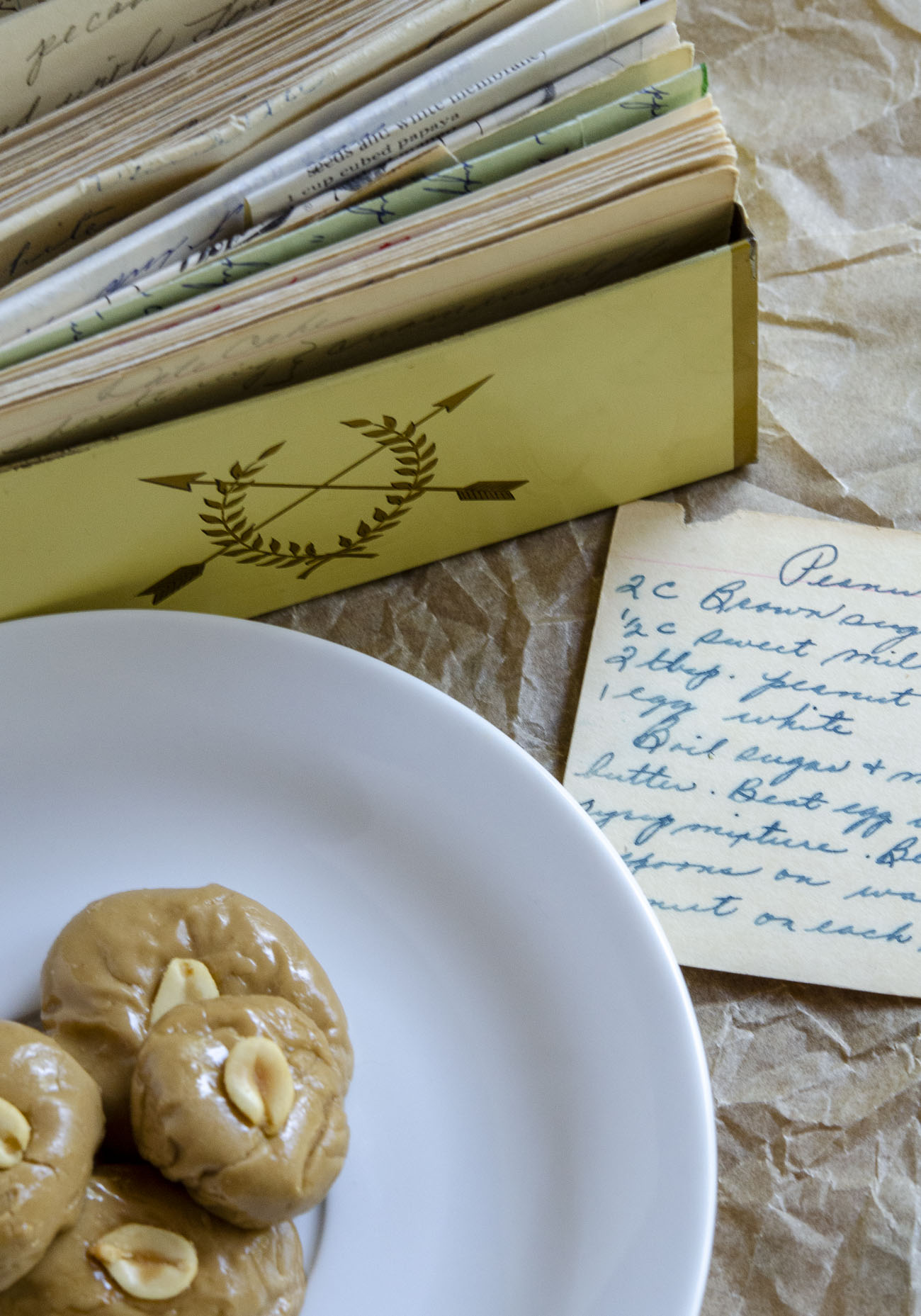 The ingredients called for are brown sugar, “sweet milk,” which is just regular milk but was a term that used to be used to differentiate between that and buttermilk, peanut butter, and one egg white. The directions say to boil the sugar and milk to a thread. I took this to mean to boil it to the thread stage in candy making, which is between 223° and 225°F. After that, you stir in the peanut butter, beat an egg white, and then beat the syrup mixture into the egg white. 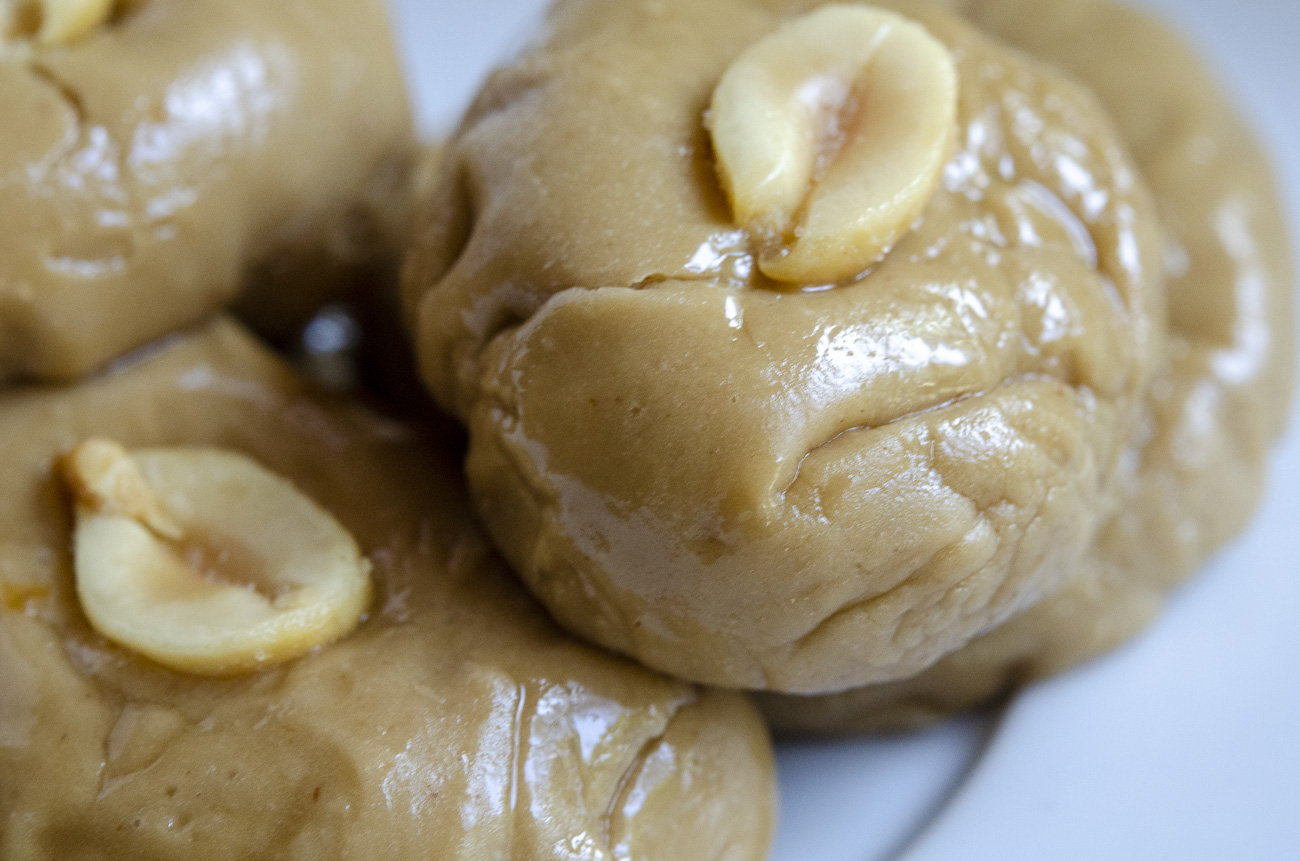 The next step is to beat the mixture until it’s stiff, which for me took quite a long while. From there, you drop the mixture out onto waxed paper and allow it to set. It’s an easy candy, delicious in its peanut butter simplicity and timeless style. 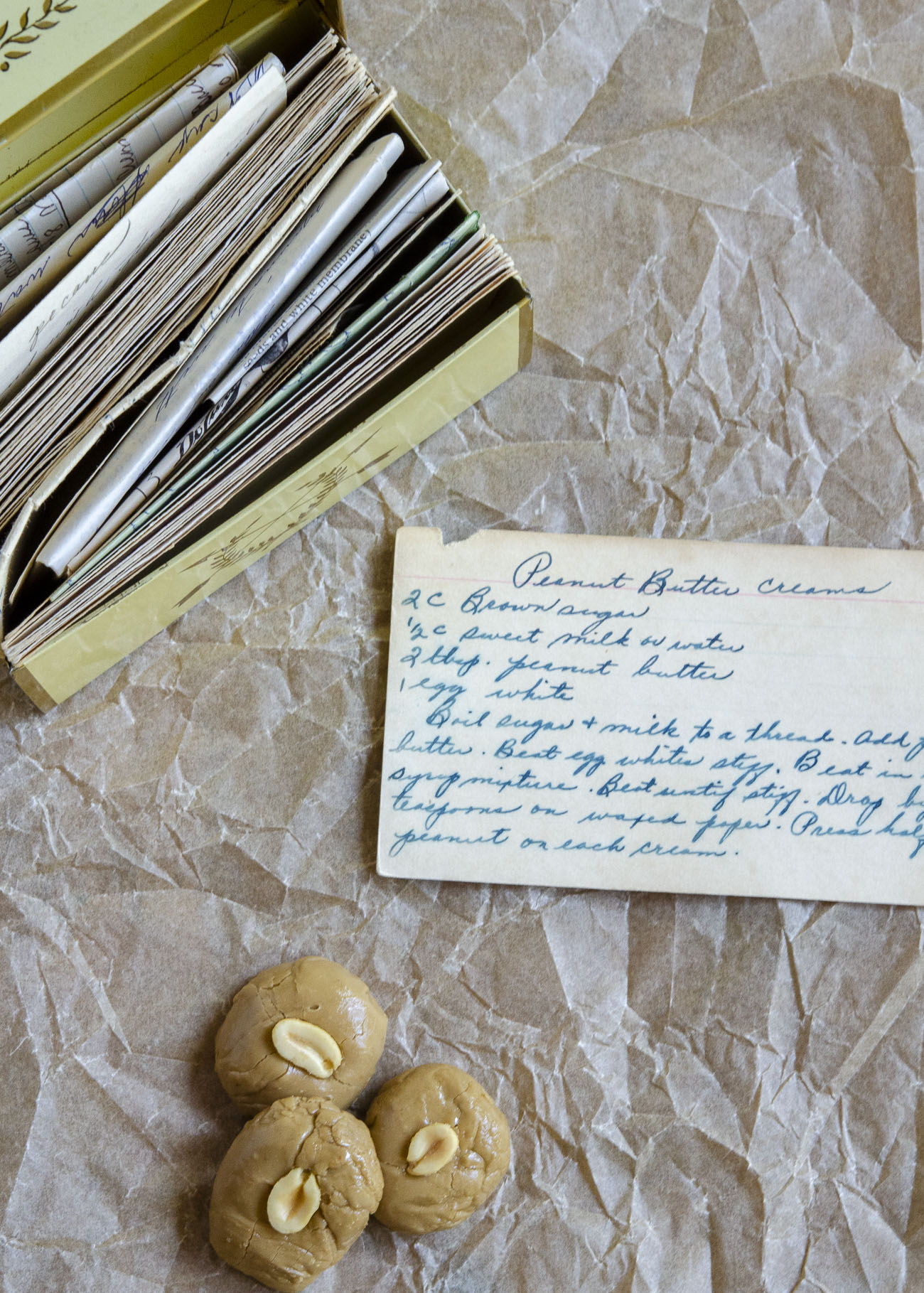