If you’re like me and like to cook, there is no doubt that you’ve probably already been online looking at websites like BuzzFeed’s Tasty or Delish which feature delicious-looking recipes and tutorials. They’re great inspiration for seasoned cooks that would like to come up with new dinner ideas, as well as excellent step-by-step tutorials for those just starting out in the kitchen. Normally, they’re nothing too outrageous of a dish, however, occasionally there will be a dish that goes viral for completely different reasons. Like the fried BBQ chicken tortilla pizza.

Yes, you read that correctly. This food mash-up was the brainchild of the U.K.-based food blog Twisted, and is technically called the “Deep Fried BBQ Chicken Stuffed Pizzadilla.” The concept of a “pizzadilla” isn’t new or originally theirs, as a quick Google search will reveal plenty of recipes. However, this particular pizzadilla looks like a flavor assault on humanity. 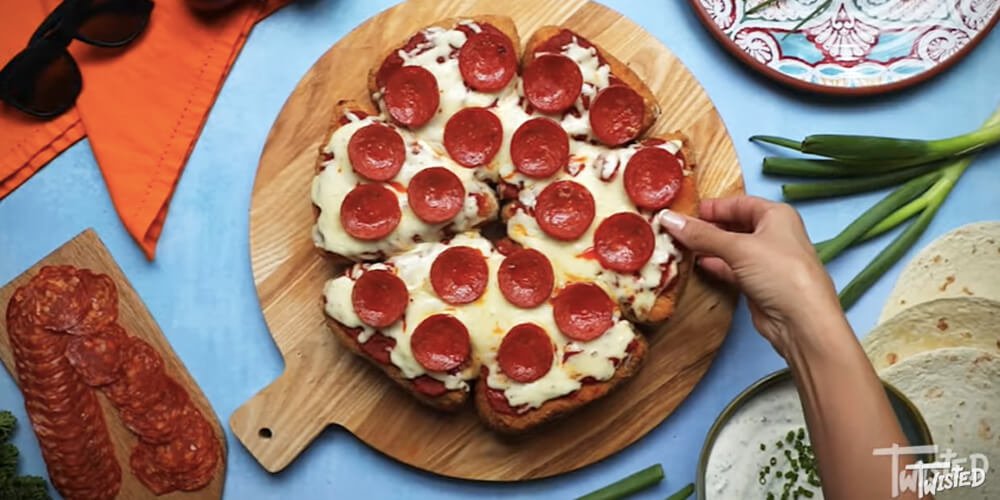 This monstrosity is fixed made with six chicken breasts that are seasoned in a BBQ rub, before being baked and shredded, after which they’re combined with bacon, onions, cheese, and BBQ sauce.

So far, it sounds good, right? Should’ve just stopped there, but no.

The shredded chicken mix is then sandwiched between two tortillas inside a cake pan, where it is then chilled, cut into six wedges – which are then coated in breadcrumbs and deep-fried.

Oh, but it gets worse, don’t you worry.

The deep-fried wedges are then reassembled, only to be topped with pizza sauce, cheese, and pepperoni. And there’s no forgetting the parsley-dill “ranch” dressing that is intended as the dip.

While you may think this is a joke, it most assuredly is not. If you go over to Twisted’s YouTube channel or Instagram page, you can find other less-vile but still questionable food mixes.

Over the weekend, Twitter user @_kurlykay came across the pizzadilla video and shared the disturbing recipe, writing, “Okay but I just wanna know WHY?????”

okay but I just wanna know WHY????? pic.twitter.com/BF49YX2jyc

The video itself has been viewed millions of times, with plenty of commentators sharing their disgust or disbelief.

“There were SO many moments I thought this train to hell would stop and let me off,” Twitter user @BasicBlaecGirl understandably wrote.

There were SO many moments I thought this train to hell would stop and let me off😭😭😭😭pic.twitter.com/h2olI4gQwQ

However, through all the masses of comments and shares, there was one individual who looked at the deep-fried BBQ chicken pepperoni pizza horror and figured, “Ok. Let’s try this.”

And after a grocery store run, Spence updated his followers to join him on the culinary adventure. However, it wasn’t long till Spence realized there was something off with the “recipe.”

“The spice measurements are a lie!!!!!!” Spence wrote beside a picture comparison of the original chicken to his sad-looking marinated chicken.

The spice measurements are a lie!!!!!! pic.twitter.com/SjTIAIVqde

It turns out as well, that slicing and preparing the BBQ chicken tortilla for deep-frying posed its own set of challenges, as Spence went to slice it, everything oozed out in an absolute mess.

Miraculously, Spence was able to get the slices to through deep-frying without a struggle. Then, it came time to put on the pizza toppings and pop it in the oven.

This is it. The moment you’ve been waiting for all night. pic.twitter.com/Lo8Lc89zYz

All said and done, the whole thing took about six-and-a-half hours to make. Then came the moment of truth as Spence went to taste his creation.

In the final video that he uploaded, Spence revealed that he wasn’t even able to swallow, taking one bite and immediately spitting it out into the trash.

I expected to like it in a gross-good kind of way. But the mixture of the sweet bbq sauce, the pizza sauce and the dill sour cream….:,,,,,;;; truly one of the most vile things I’ve ever eaten.

I’m not taking any further questions.

Spence tweeted, “I expected to like it in a gross-good kind of way. But the mixture of the sweet BBQ sauce, the pizza sauce, and the dill sour cream … truly one of the vilest things I’ve ever eaten.”

While we had our sneaking suspicions that the pizzadilla was an unappetizing disaster, at least we have our solid confirmation. Thank you, Spence, for taking one for the team.