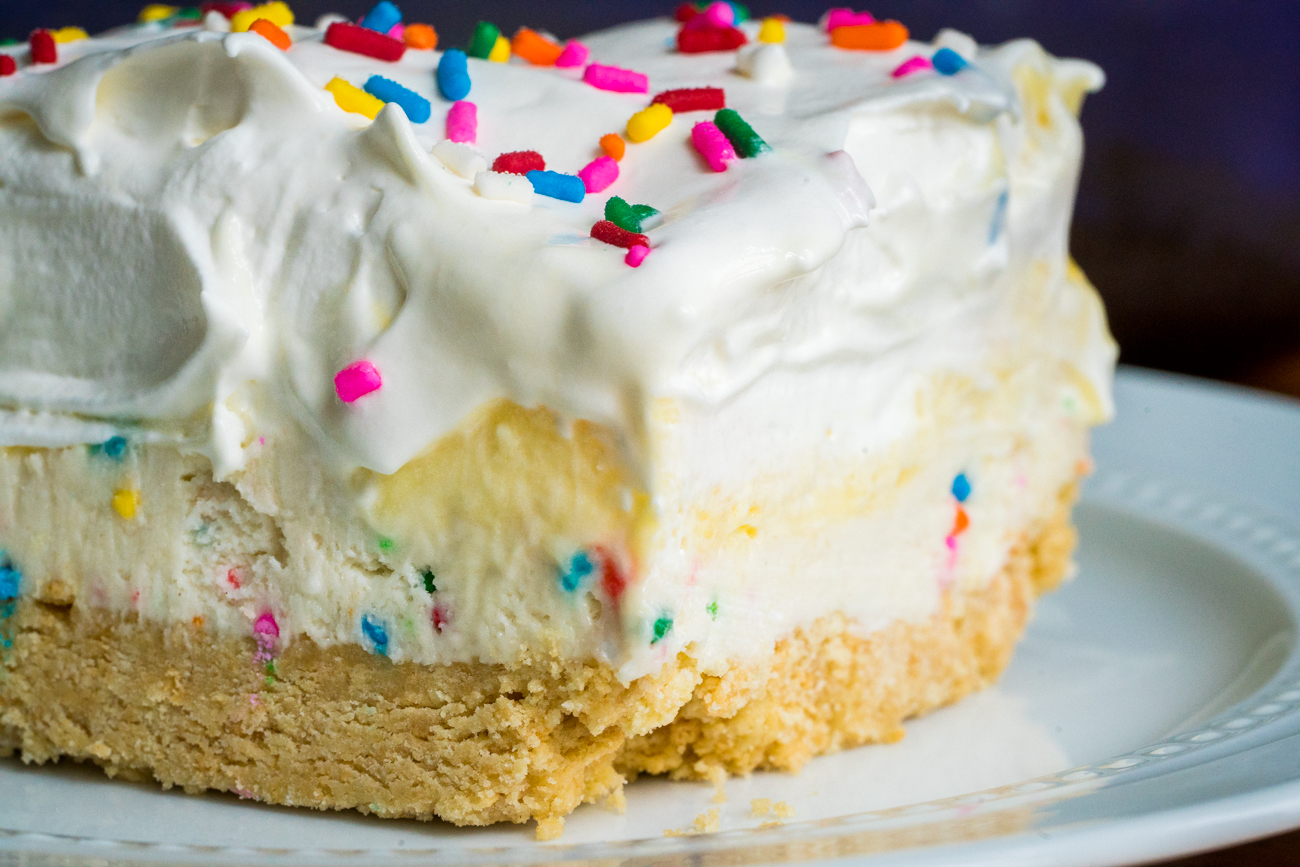 As a kid, whenever I encountered a Funfetti cake at a birthday party, I was absolutely over the moon. Clearly, the hosts had made the right choice for the festivity – a sweet, white cake dotted with rainbow sprinkles and topped with sprinkle-studded frosting. In my eyes, there was no need for chocolate or yellow cake… Funfetti was where it was at, always. In adulthood, I’ve made room for plenty of other flavors, but I still get mighty excited about Funfetti. It’s just so simple and colorful and good! And luckily it translates oh so well to other types of dessert, like this No-Bake Funfetti Lush. It’s cool and creamy and just as fun as any birthday cake. (And it’s super easy to make.) 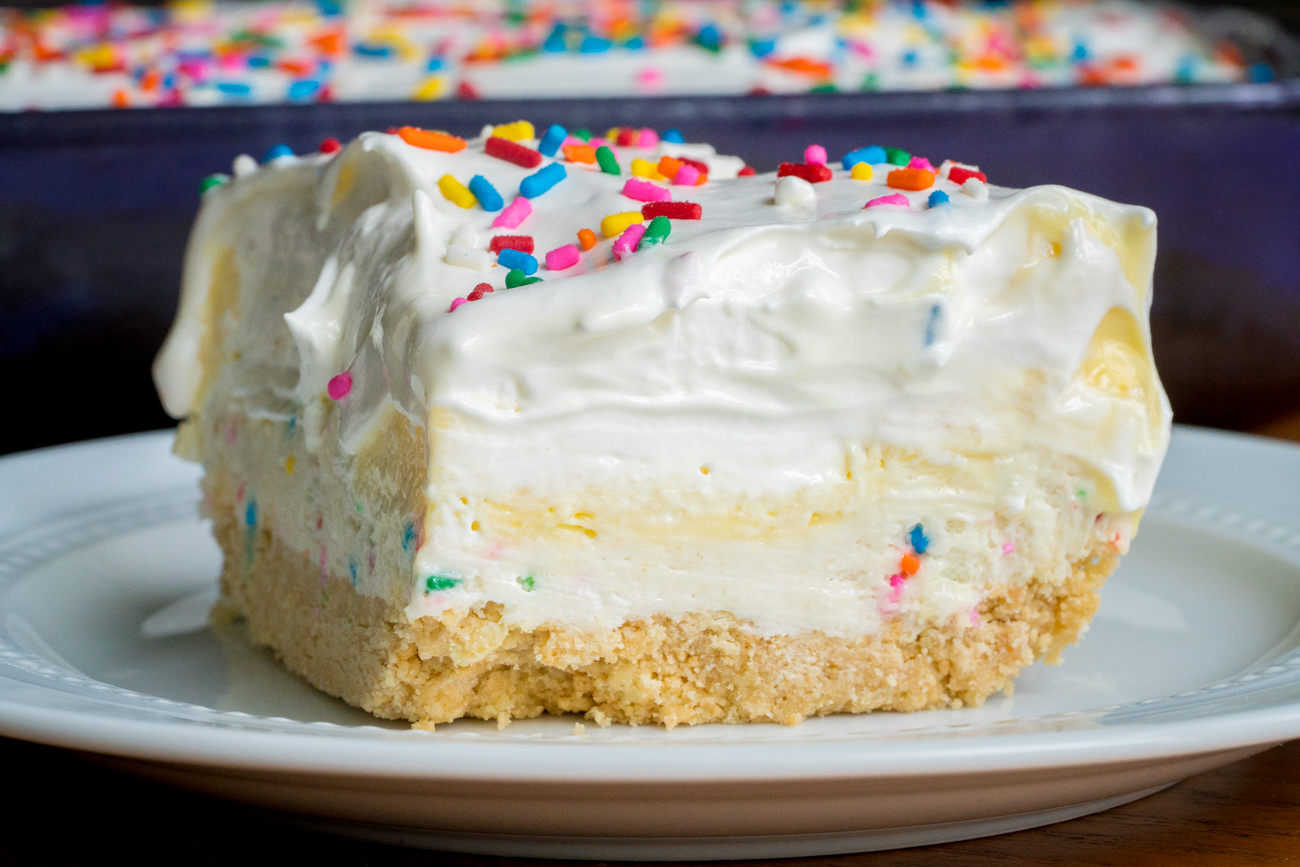 If you’re not familiar, a lush is a creamy layered confection that always involves a cookie crumb crust and some combination of no-bake cheesecake, pudding, and whipped cream. This particular version starts with Golden Oreos, which are crushed into crumbs and mixed with butter to form a sweet, vanilla-flavored crust. 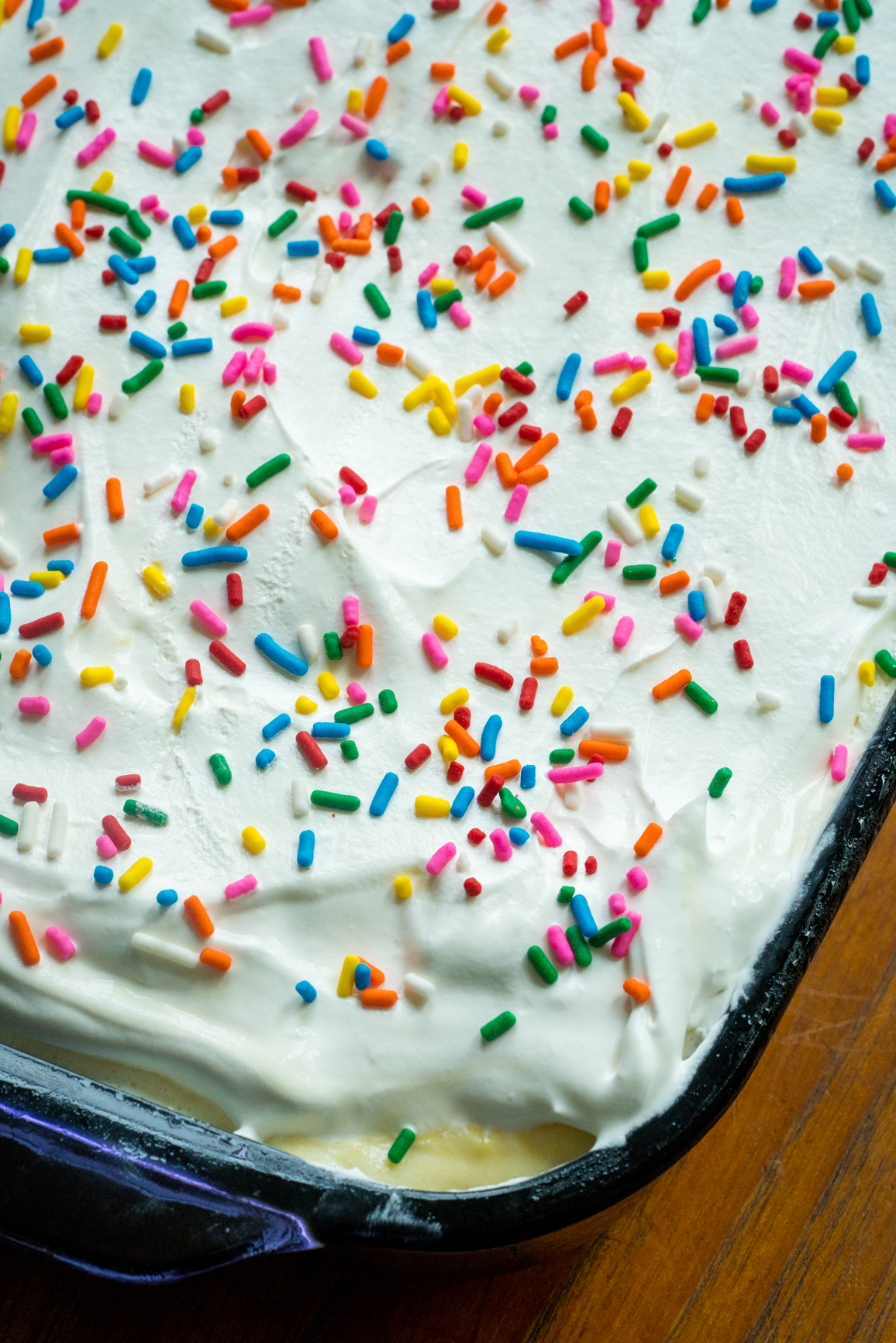 The cheesecake layer here relies on cream cheese (as most cheesecakes do) but also has whipped topping, Funfetti cake mix, powdered sugar, and a few additional sprinkles mixed in. The pudding layer goes on next, and then a layer of whipped topping, and then the whole thing goes into the fridge to chill and set up. 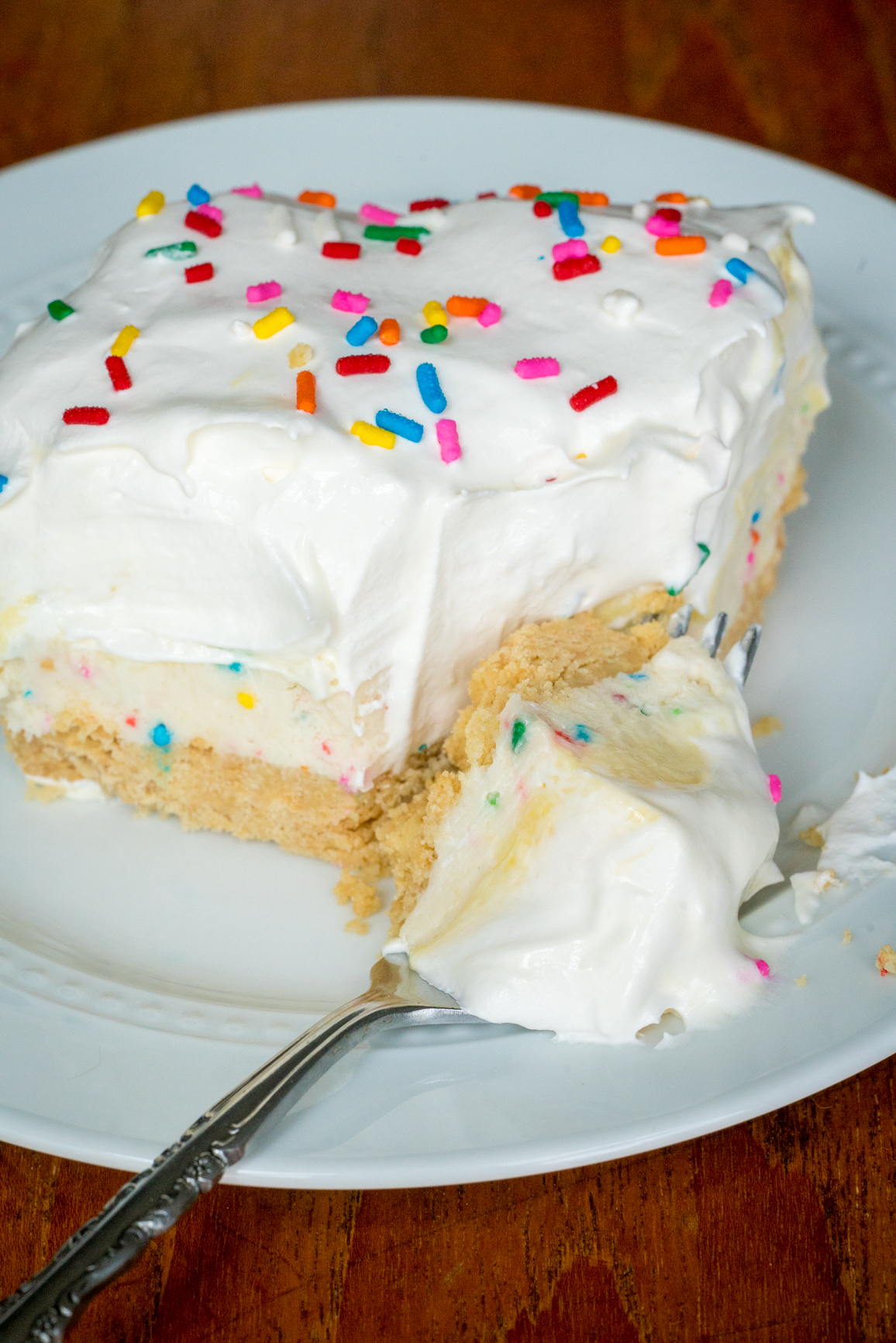 It’s three layers of creaminess, but they’re all distinct layers. The bottom layer has a denser, cheesecake-like bite and it’s rich in Funfetti flavor (thanks to the actual cake mix and the sprinkles running throughout). The second layer ends up with a softer pudding consistency, while the top lends a fluffy kind of creaminess. And don’t forget they’re all backed by that cookie crunch from the crust. 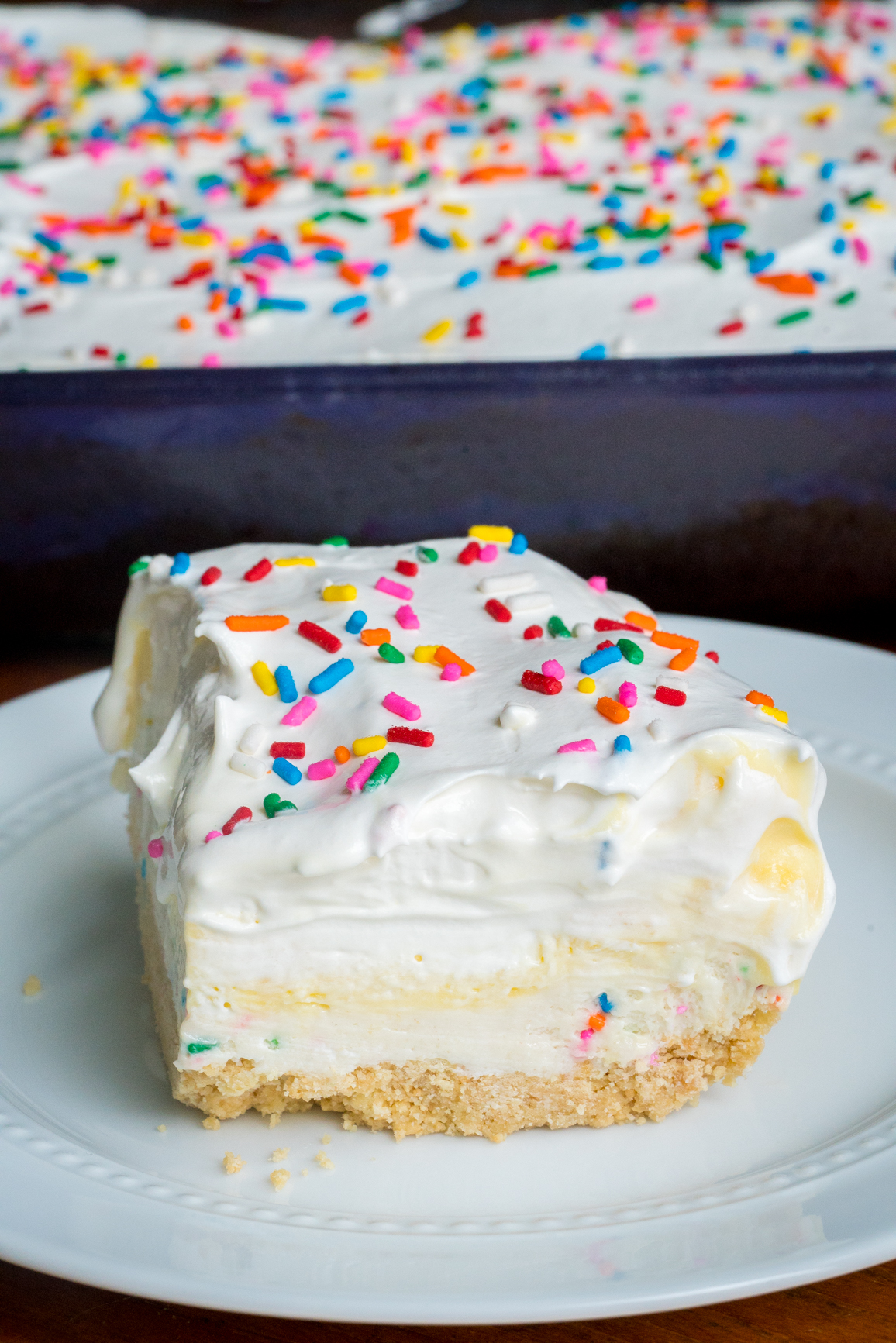 It’s a delicious dessert with so much texture and all of that trademark Funfetti flavor. Basically, it’s the kind of dessert that’s really easy to get excited about, and you don’t even have to touch your oven to enjoy it.