This Fireball Whiskey Pumpkin Pie Recipe Will Spice Up Your Fall

As the days get shorter, there is more time to be spent indoors, hiding from the cold. And during that time, we tend to do more indoorsy stuff, like baking. Personally, I’m not much for baking. I never really liked it as there is an exact science to it. I much prefer the unrestrained thrills of cooking. But one woman in particular really likes the kitchen as well, and she’s blogged about a fireball whiskey pumpkin pie that sounds pretty incredible.

Going by the username Lauraiscooking, her Tumblr bio is pretty simple and straight forward. She writes, “I’m a young woman in Texas. A novice cook learning as I go. This is a blog of my cooking adventures, escapades, and disasters.” It sounds like she could be any of.

She recently wrote about her adventure with the Fireball Whiskey Pumpkin Pie, and it sounds great. 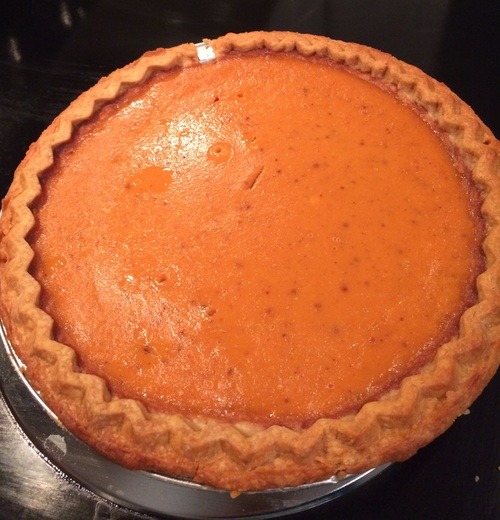 She started off writing:

“Last Sunday was lazy in the best way. The day ended in the pie, which made it even better. My boyfriend found a recipe by the BBQ Pit Boys for Fireball Whiskey Pumpkin Pie, and we decided to try it out! It was pretty delicious. I had never made a pumpkin pie before, and adding fireball made it a little more interesting. The original recipe from the BBQ Pit Boys requires that you cook the pie on a grill (link below). Apartment living doesn’t leave much room for a grill, so I used standard pumpkin pie cooking instructions instead and put it in the oven. Also, after combining all the ingredients, there was enough filling for 3 whole pies and there were only two pie crusts! I would recommend cutting this recipe by 1/3 or 2/3s, though that’s a little complicated as it requires 4 eggs. Better yet, you could just find some friends to pawn it off on if you don’t want it all to yourself! The cinnamon and whiskey taste I was expecting from the Fireball wasn’t very strong, so I have modified the recipe below to include cinnamon as well.”

Sounds like solid advice, and off to a great start, we are with you so far. I think I might start baking myself now.

If you also want to try making it yourself you can follow the recipe and instructions by Lauraiscooking below:

For the crusts, follow the directions on the pie crust package. Preheat your oven to 400 F. Remove crust from freezer and allow to thaw at room temperature for about 10 minutes. Use a fork to pierce the bottom and sides of the crust which helps the crust to bake evenly. Place the crusts on the center oven rack and bake for 10-15 minutes until it’s light golden brown. Remove and allow the crust to cool completely prior to filling.

While the crusts are baking, prepare the filling. Crack eggs and whisk until the whites and yolks are combined but not frothy. Combine sugar, salt, evaporated milk, canned pumpkin, cloves, cinnamon, ginger, and whiskey. Stir until it is thoroughly mixed. Pour the filling into the cooled pie crusts.

Place the pies on the center rack of the oven at 425F. Bake at 425F for 15 minutes. Reduce the oven temp to 350F and bake for another 40-50 minutes until a toothpick inserted into the comes out clean. Allow cooling for 1-2 hours prior to serving.