Costco Is Selling A 72-Pound Parmigiano Reggiano Wheel Of Cheese

For those of us that don’t know when to say “stop” whenever the waiter comes around to top off our pasta with cheese, there is some good news. Now we don’t ever have to learn self-control as Costco is now selling a 72-pound wheel of cheese!

The Parmigiano Reggiano hunk of cheese – which is roughly the size of a small child – can be yours for only $900. And this isn’t some kind of joke, Costco Deals Online posted a picture of the cheese wheel on Instagram, as well as having its existence confirmed on Costco’s website. According to the website’s “features” specifications, the colossal wheel of cheese is imported from Italy where it has been aged for 24 months. And yes, the cheese is extravagant. 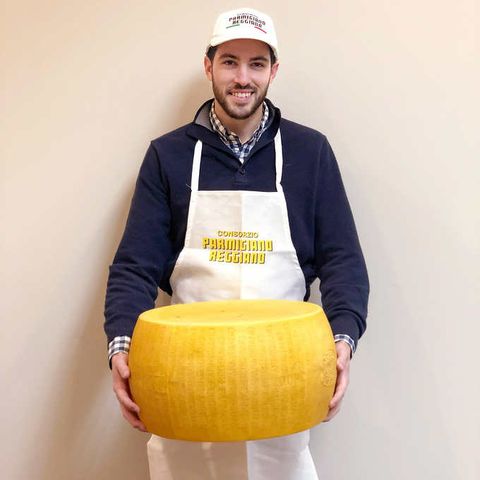 If you end up buying one, just keep in mind that it will ship in two-to-three days, and only on Mondays, Tuesdays, and Wednesdays in order to avoid getting stuck in a weekend transit.

If you’re wondering who would possibly buy this, just know that there have already been some buyers – and there are reviews to prove it too.

Here is what people are saying about the glorious 72-pound hunk of cheese:

One person wrote about buying it for their son’s wedding, “Bought this as a surprise for my son’s wedding reception (he is a fiend for the stuff). With the help of youtube instructions and the proper tools and his good buddy, he and his brother cracked open the Parm in front of family and friends, to great applause and cheers. It was fun to watch and actually quite beautiful! The cheese is magnificent; fragrant and delicious. Afterward, guests were pleased to take home a wedge as a party favor of sorts (with the groom reserving probably a quarter of the wheel for himself, haha).”

“Got this as a gift, what the heck am I supposed to do with all this cheese!?” another person joked.

These people planned ahead, saying, “We purchased this so we could have a flaming wheel of cheese for Christmas Eve dinner. It worked perfectly. We still have at least 60 lbs. left. So I guess we’ll be having some more parties! Then split the wheel up and share with friends.”

And this one was quite simple as the buyer just wrote, “A good example of the king of cheeses.”

Besides being used at large parties or gatherings, there’s plenty of other things you can do with your 72-pounds of cheese. You can use it as a topping for soups, pastas, salads, pizzas, etc. You can even use it in a fancy cheese board. Point is, there are loads that can be done. Costco itself also describes their cheese wheel as “the apex of Italian cheese making and a symbol of Italian culture and civilization.” That description alone should be enough of a selling point for anyone who has a spare $900 in their pocket.