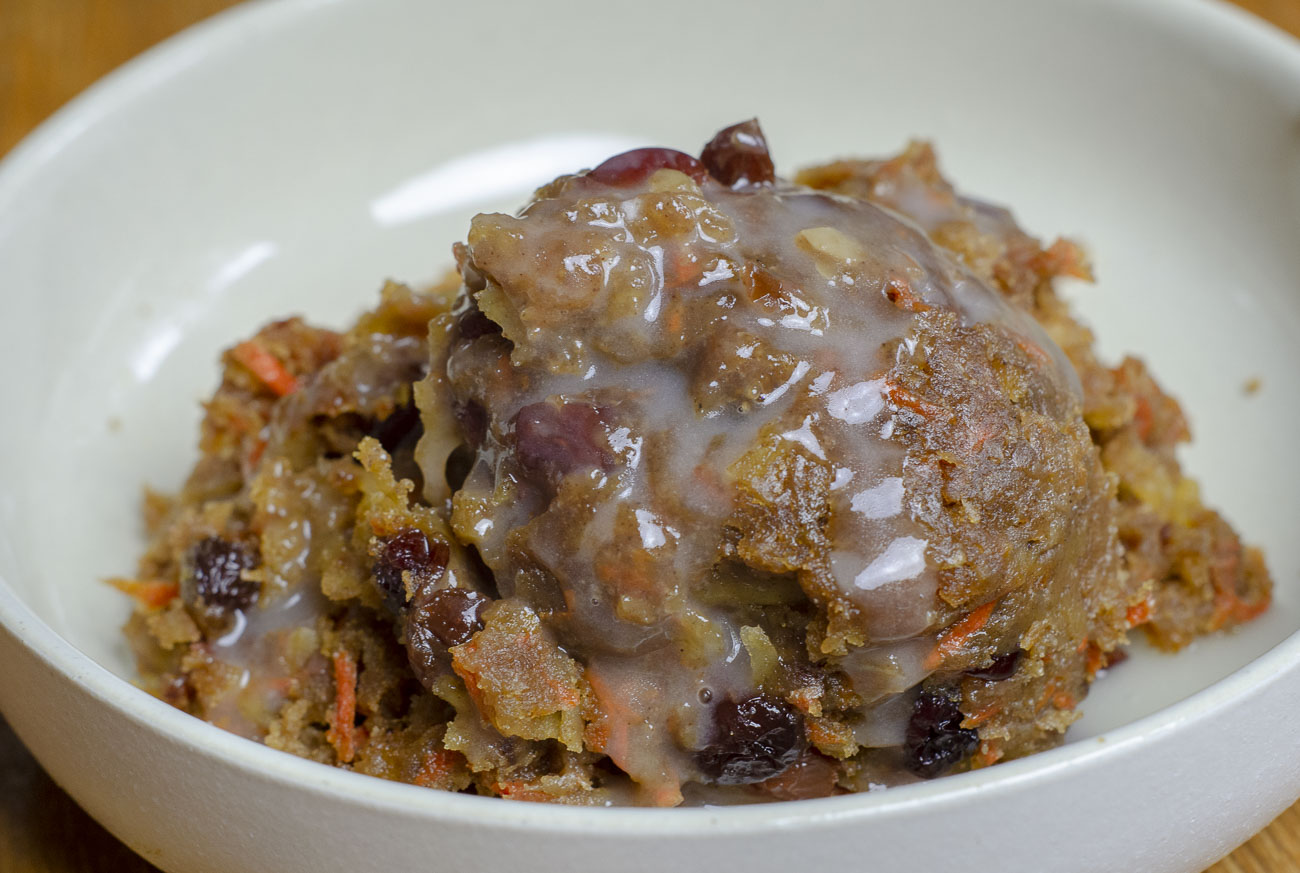 When I first saw this recipe card in an old recipe tin, I was intrigued. While my family loves carrot cake, our carrot dessert experience has been pretty much limited to a cyclic devotion to that one cake, and the category of steamed puddings is just not a part of the culinary world that I’ve yet delved into. I figured this old recipe might give me a chance to see what else is out there when it comes to carrot-based desserts and also demystify the allure of the steamed pudding. 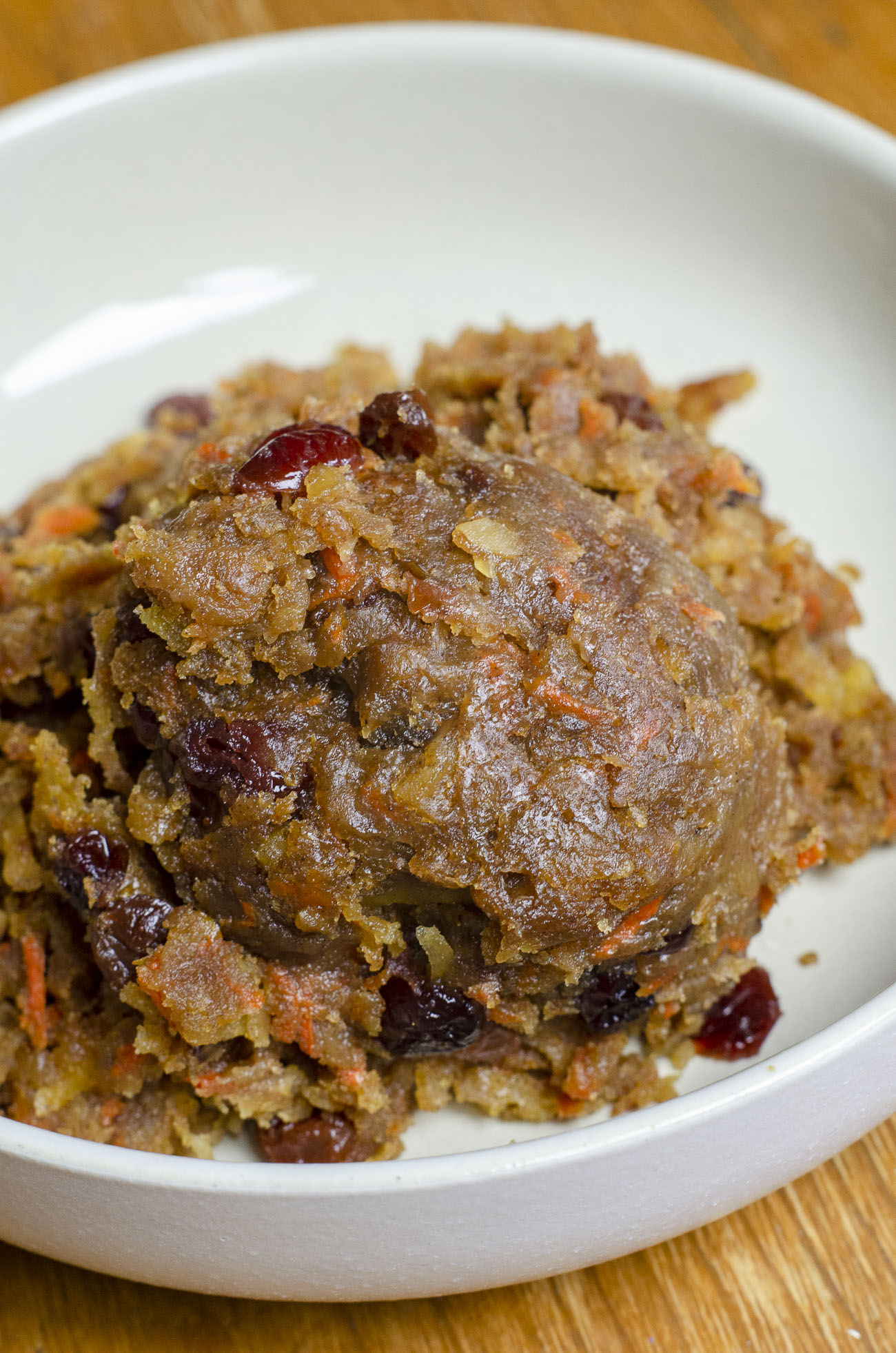 What I can now tell you is that the allure of this steamed pudding is that it’s an oh-so-moist and flavorful dessert that’s studded with varying textures that keep it from tasting too soft. It’s a little reminiscent of a super moist carrot cake, though the sweet and warm vanilla sauce poured over the top is a totally different experience than the usual cream cheese frosting that you might find with said cake.

This recipe came out of an old recipe tin that I recently found and started cooking my way through. I call it the Recipe Tin Project. It’s chock full of old recipe cards, most of which seem to be from the ’60s and ’70s. I love food history, and the idea is to breathe new life into these recipes from the past and maybe learn a technique or two from them along the way. A lot of the cards seem to be collected from various friends and have cute illustrations, though this one is written out with a handful of other recipes on a folded up piece of cream-colored letter-sized paper. There are everlasting classics in there like Chocolate Cake and some not so timeless creations like Jellied Chicken Gumbo. 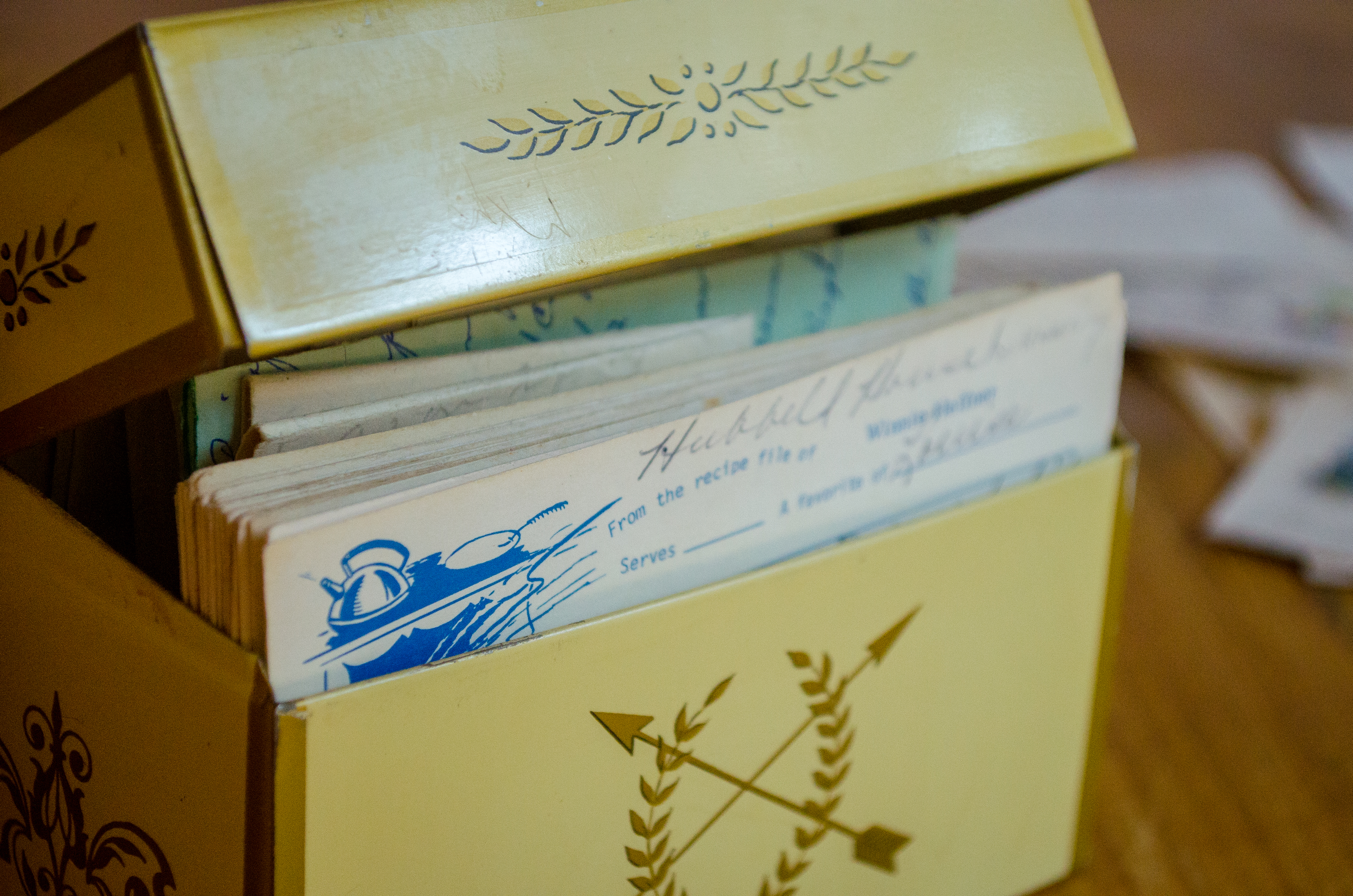 There are two sheets of silky paper that are folded like a book with various recipes written quickly across them. Most have a name listed beneath the title. Some are so hastily written, there are no instructions at all, only ingredients. One is just a quick tip from a ‘Mrs. Nellie Malloy’ to “Slice bananas crosswise, dip in mayonnaise and then in chopped nuts, serve on crisp lettuce leaves.” (Which does not sound particularly appetizing to me.) This one has the note written at the end, “This is good,” and comes from someone named Millie Malstretti. 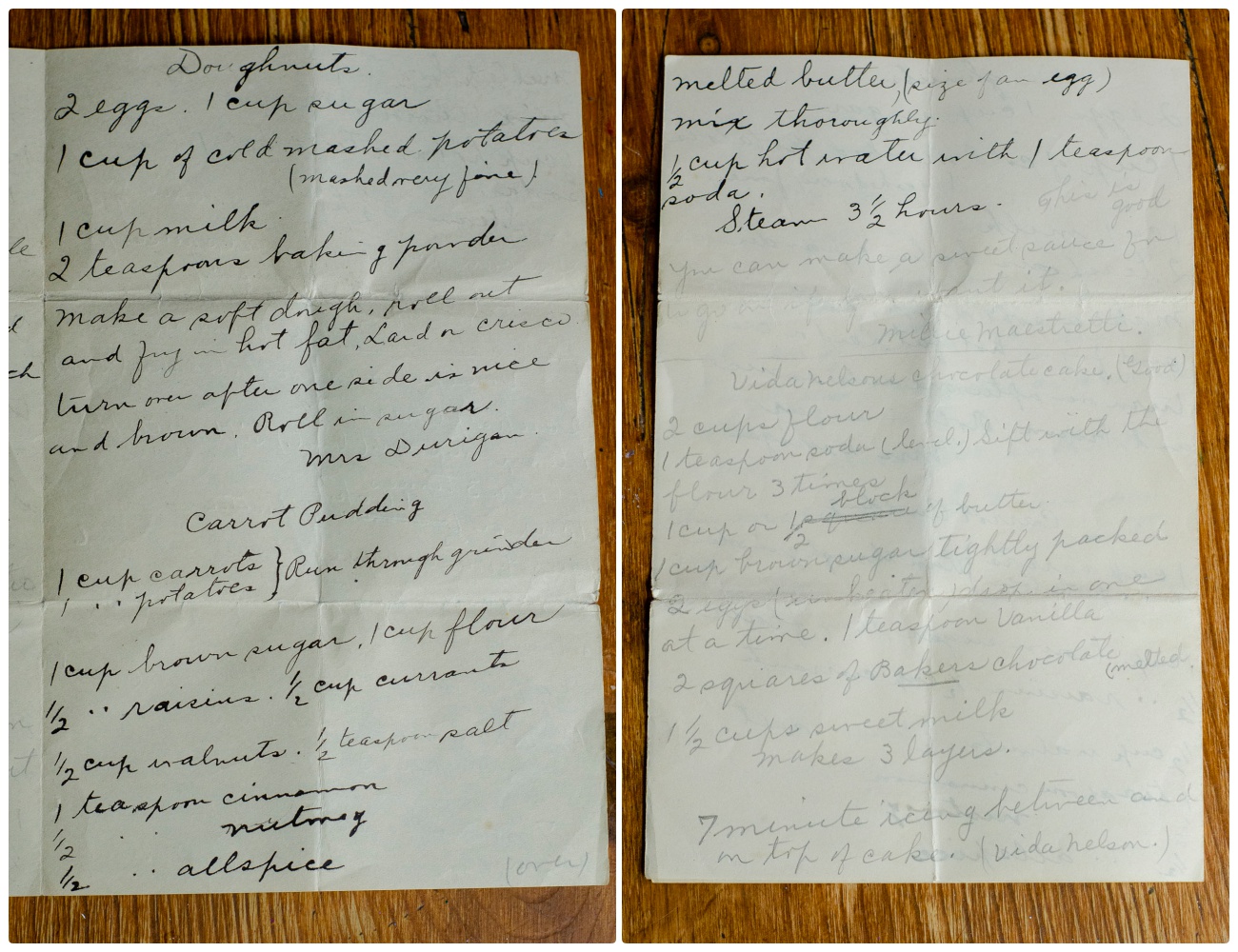 The instructions aren’t plentiful, but they do call for running the carrots and potatoes “through a grinder.” I opted to just go ahead and use my basic box grater, though I would suggest using a finer grating surface than I did. Equally vague is the call for melted butter “about the size of an egg.” By literally holding up an egg to a stick of butter, I estimated this to be somewhere between a third and a quarter of a cup. I used a third of a cup, and that seems to be just the right amount. 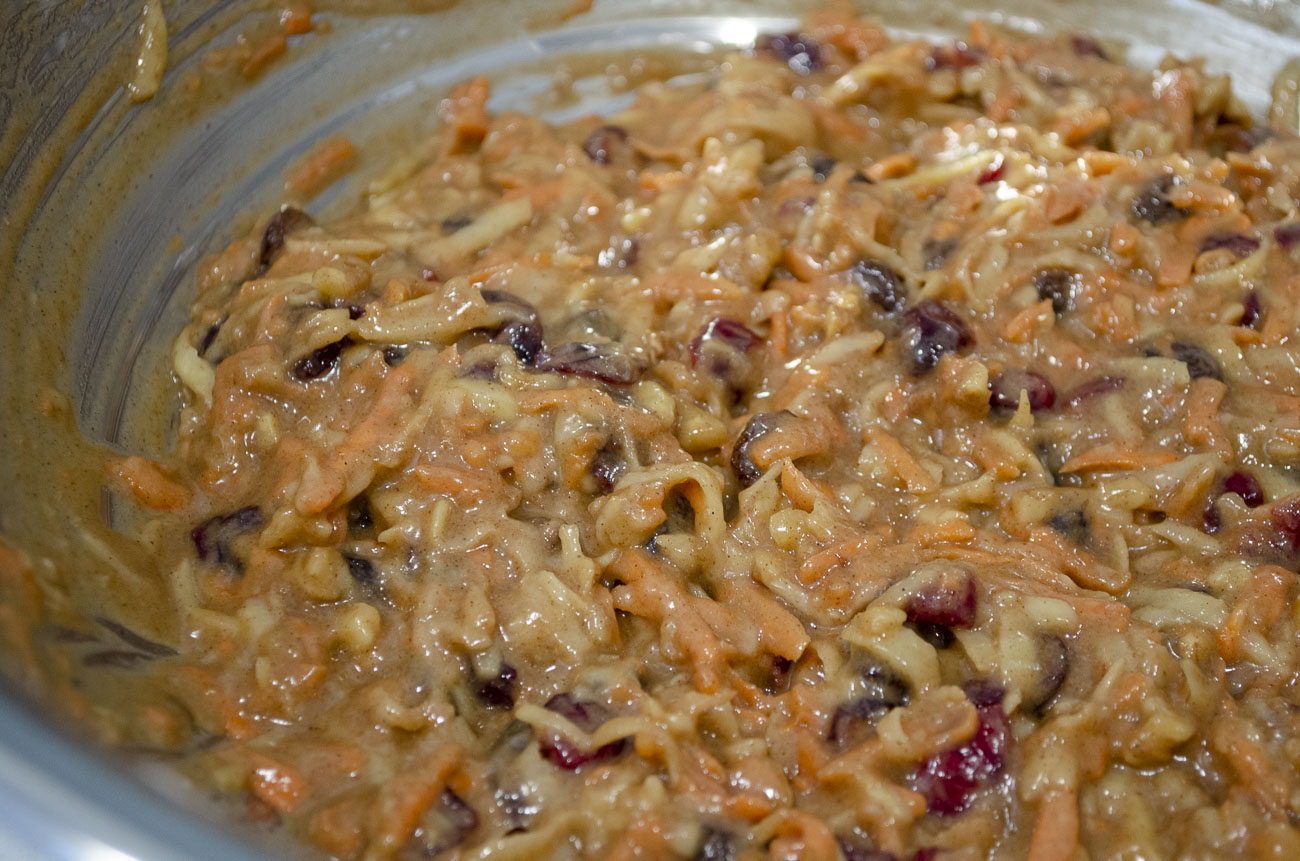 Listed below the note to “mix thoroughly” is a line that calls for 1/2 cup hot water and one teaspoon of soda. I wavered back and forth on whether that was meant to be a part of the mixture itself, or whether that was meant to constitute the steaming liquid. After consulting some other traditional carrot pudding recipes, I found that there usually wasn’t any additional liquid included in the mixture and assumed that that was indeed the steaming liquid. 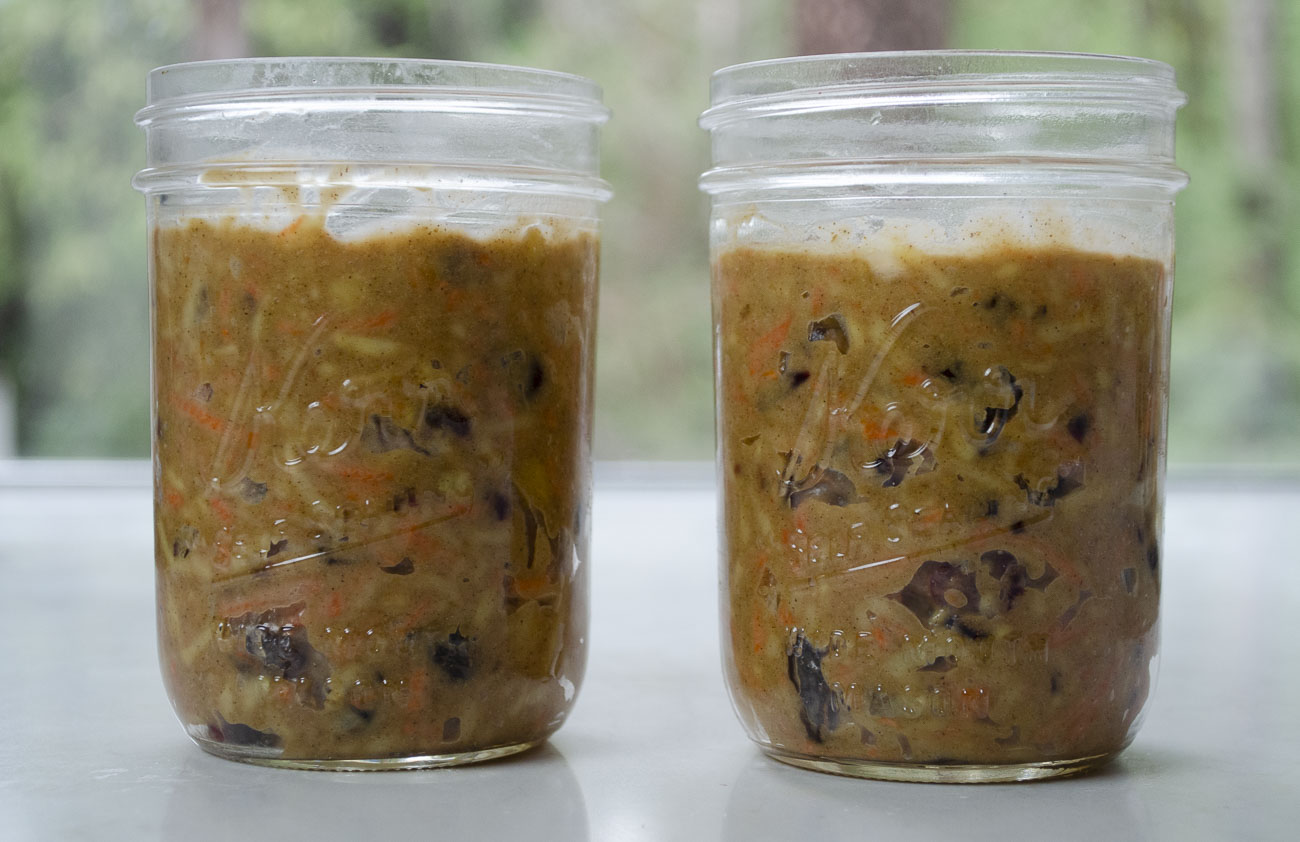 Since I don’t have a pudding mold, I opted to use two mason jars, though I’ve seen other people suggest that a one pound coffee can works just as well. While I followed the recipe on the card as closely as possible, I decided to measure the steaming liquid by how far it filled my pot, rather than the 1/2 cup of water called for on the card. As for the baking soda, it’s sometimes called for in boiling water for different reasons – it makes hard-boiled eggs easier to peel, it can make the water come to a boil slightly faster, it helps to make a crispier roasted potato. In this application though, I didn’t see a need for a more alkaline steaming liquid and I ended up just leaving it out of the mixture. 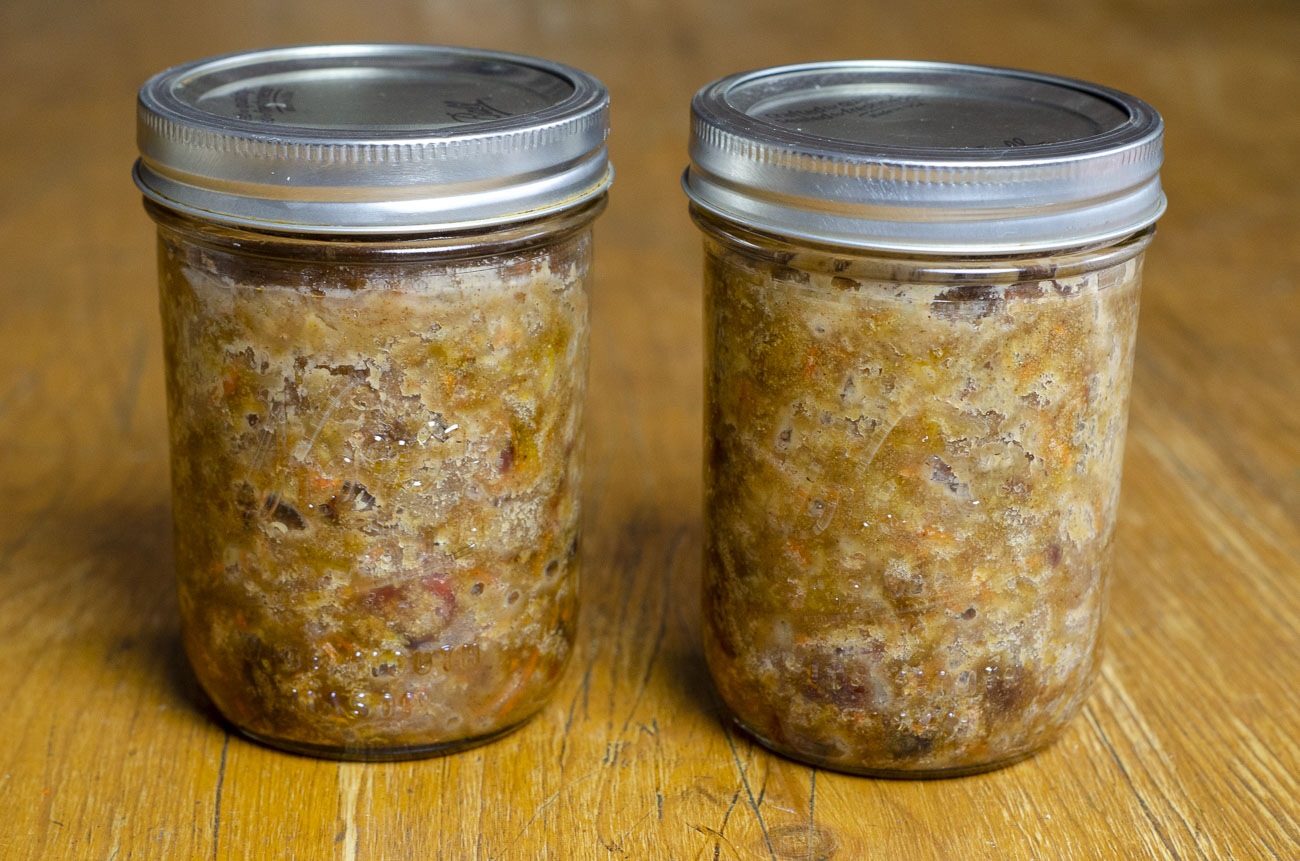 If -like me- you’re new to steamed pudding, you can expect a dessert that’s more of a very moist cake than a creamy pudding. This one is full of flavor and generously spiced (no you can’t taste the potatoes) and a simple and sweet sauce is a lovely contrast to the spices beneath it, so don’t skip that step! Though the tradition of making Carrot Pudding for Christmas goes back hundreds of years, it’s not one that my family has ever taken part in. Like its cousin Plum Pudding, it’s a satisfying way to finish a decadent meal or even a simple one, and I’m so glad this old recipe card opened my eyes -and tastebuds- to it. 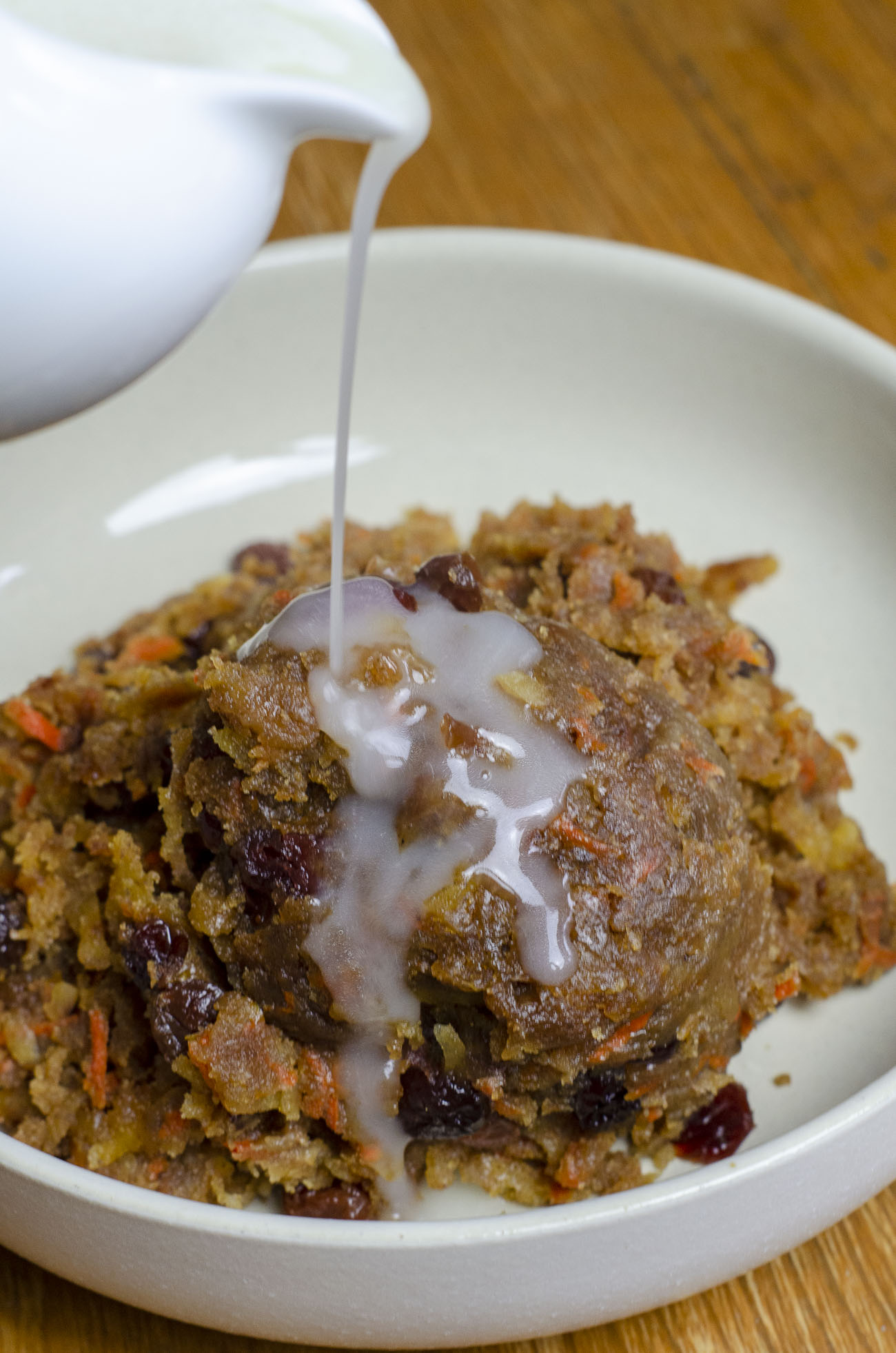