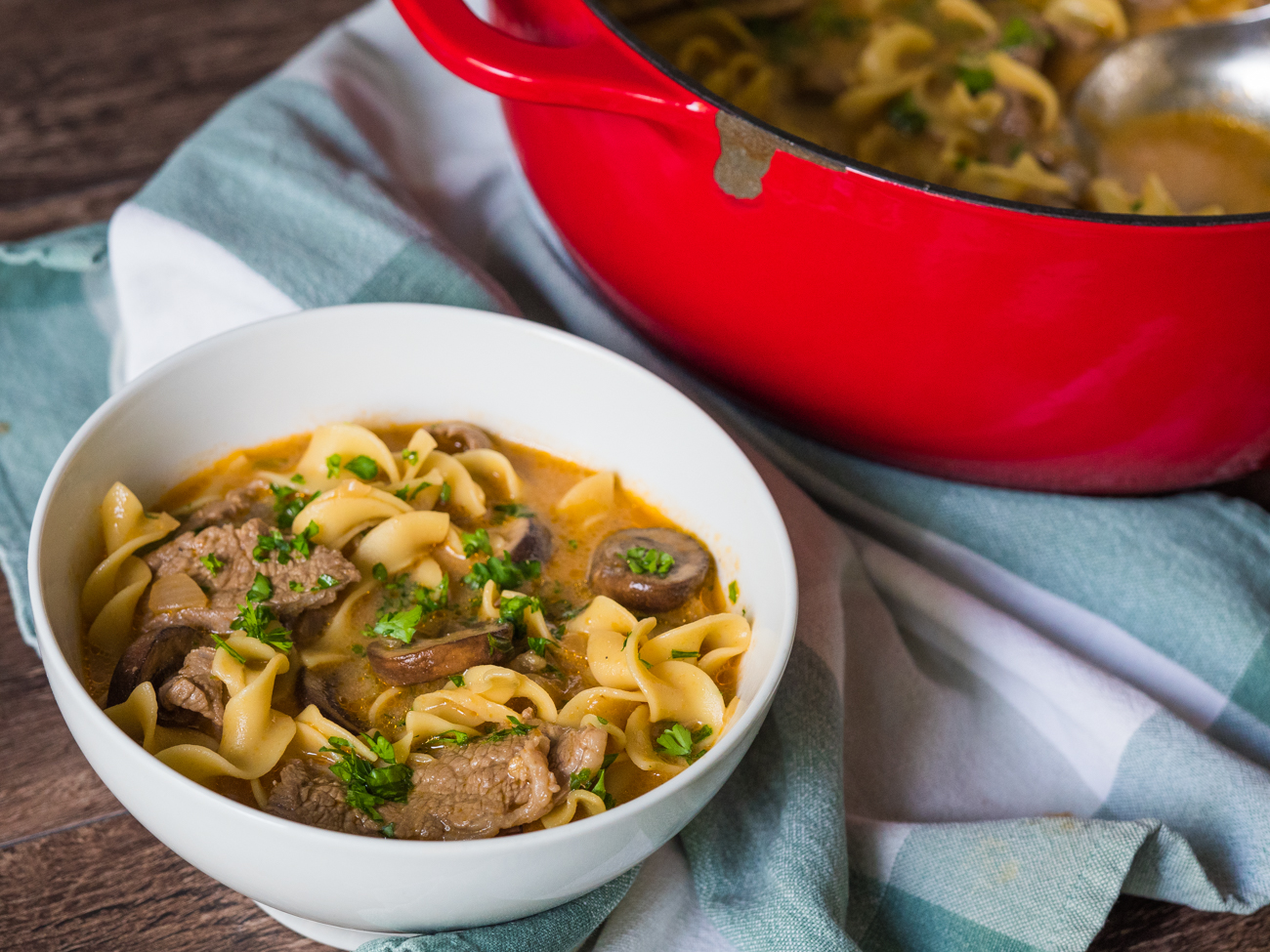 It’s no secret that beef stroganoff is mighty fine comfort food. Yet it’s equally apparent that soup does a wonderful job of warming the soul. So why not bring the two together and create one singular bowl of comfort? That’s exactly what we’ve done here. (And, oh my was it a good plan.) A hearty soup that’s punctuated by tender egg noodles and fresh herbs and surrounded by a silky, slightly creamy broth… it’s just as cozy as you’d expect. (And did I mention that it comes together in one pot? It does. In less than 30 minutes.) 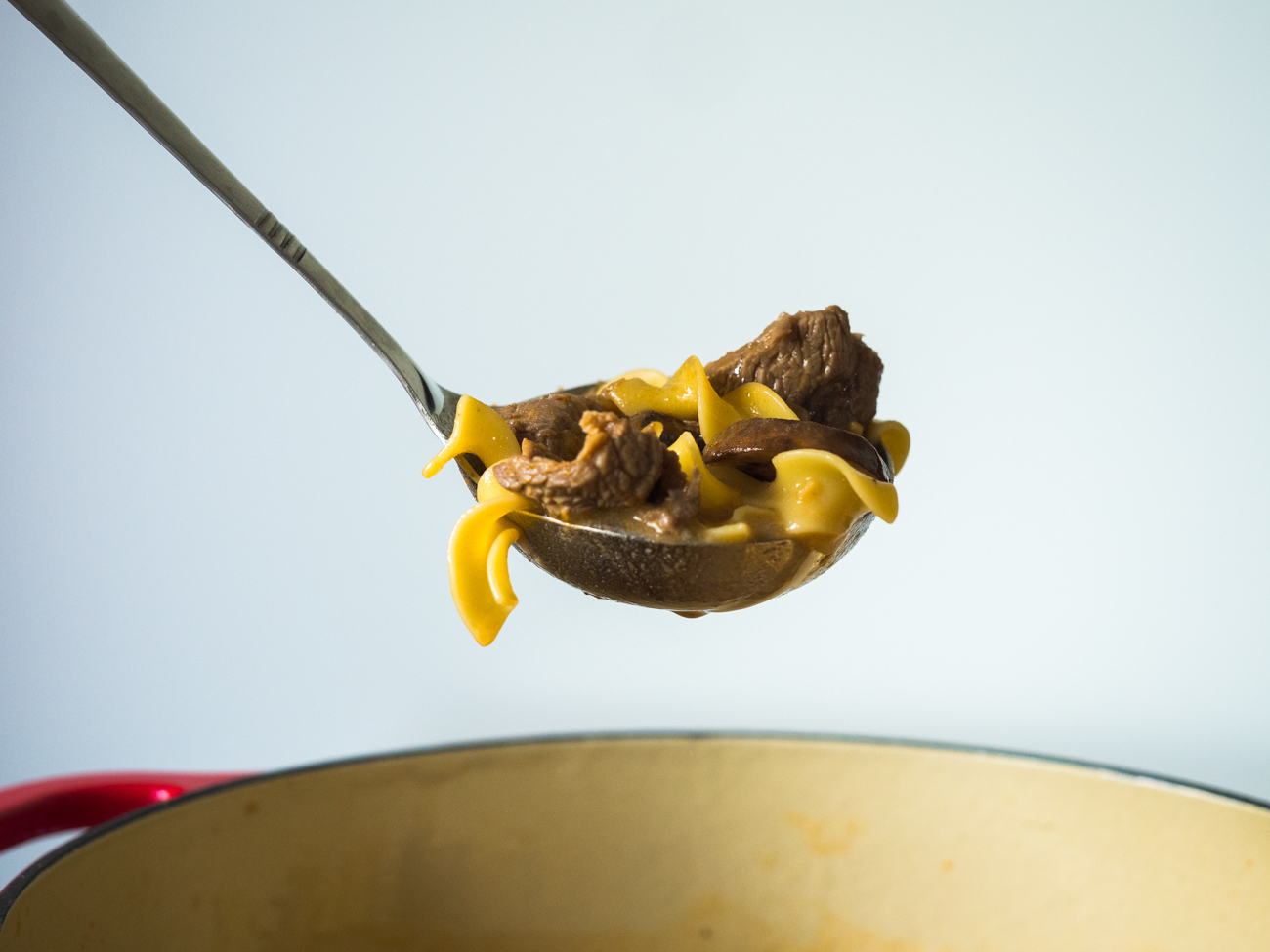 As many great things do, this starts with butter. You melt it in your pot and let it get nice and hot before searing some thin strips of steak in it. Flank or sirloin works well here, just slice it nice and thin and don’t crowd the pot too much. The steak comes out and onions and mushrooms go in. (What smells better than onions browning in butter? Oh, maybe garlic. But don’t worry, that goes in next.) 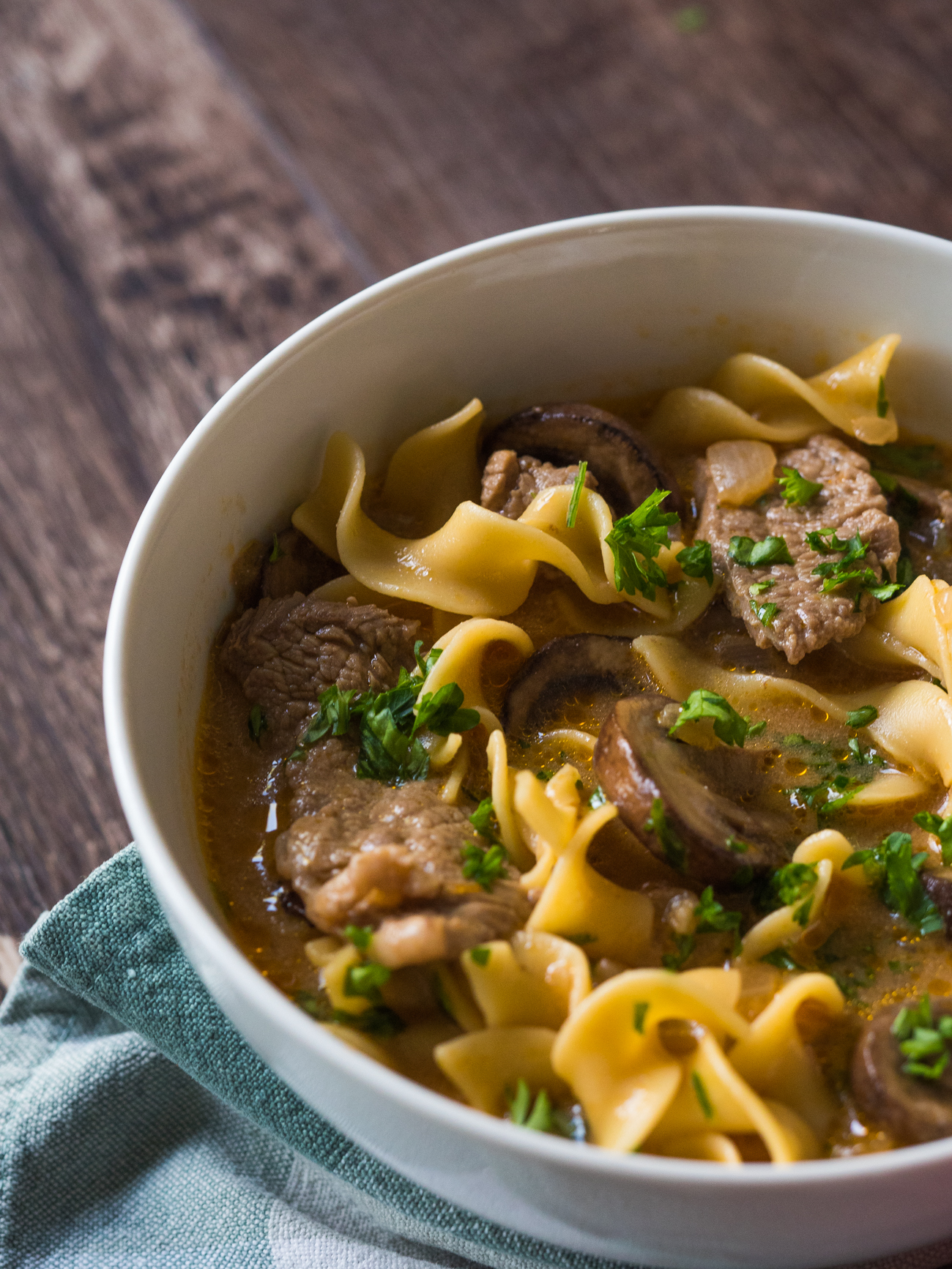 The pot gets deglazed with some tomato paste and white wine, so all those stuck-on bits of flavor from the steak get incorporated into the broth. That broth is made up of flavorful beef stock and a touch of Worcestershire sauce and the egg noodles cook right in it so that every bite is imbued with savory beef flavor. 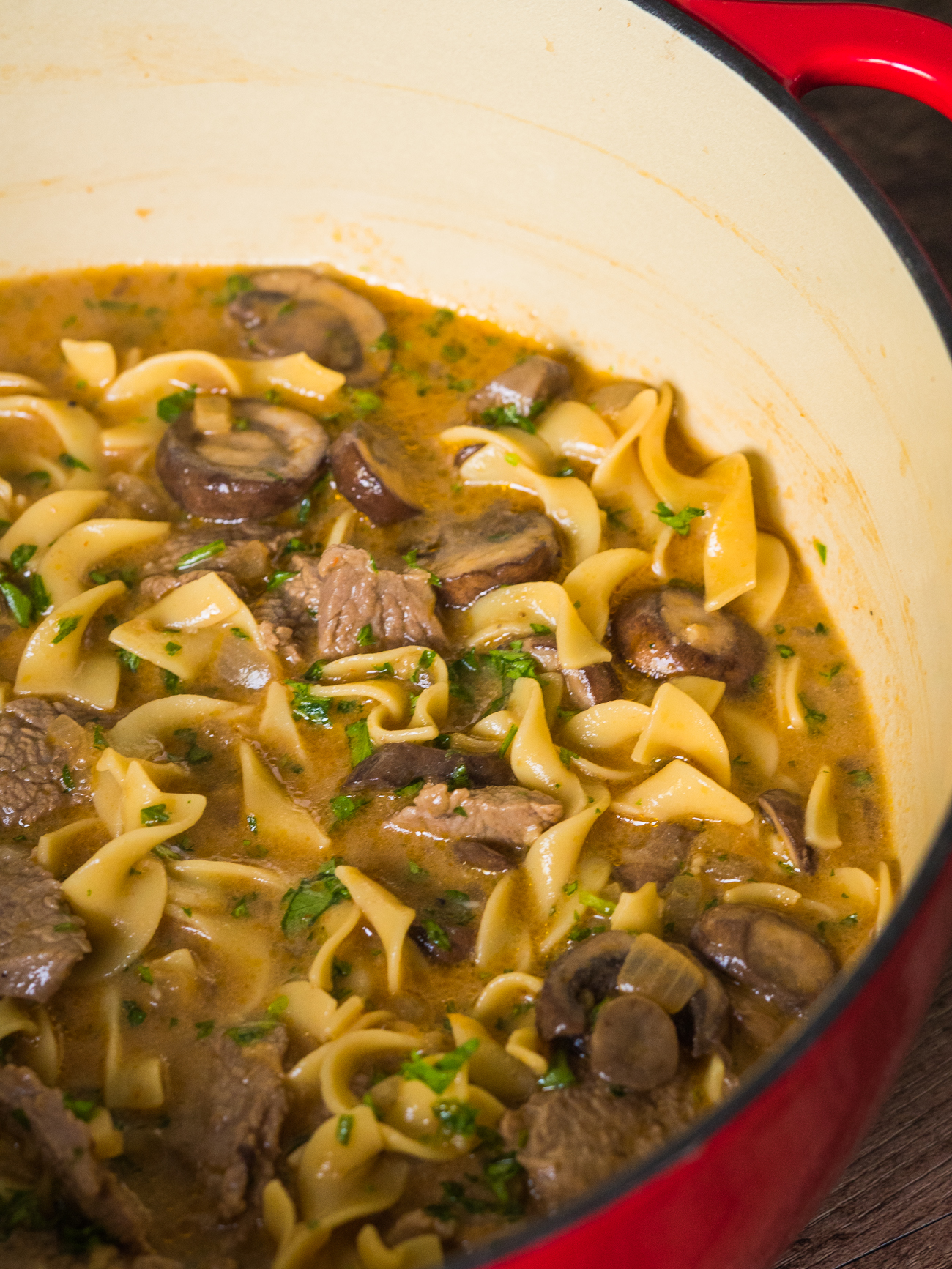 Once the noodles are tender, you whisk together some sour cream and a little bit of flour before you stir it into the soup. This thickens it up just a tad, but mostly lends a tangy, creamy touch and a silkiness to the broth. The beef goes back in just at the end so that it gets warmed through but remains oh-so-tender. 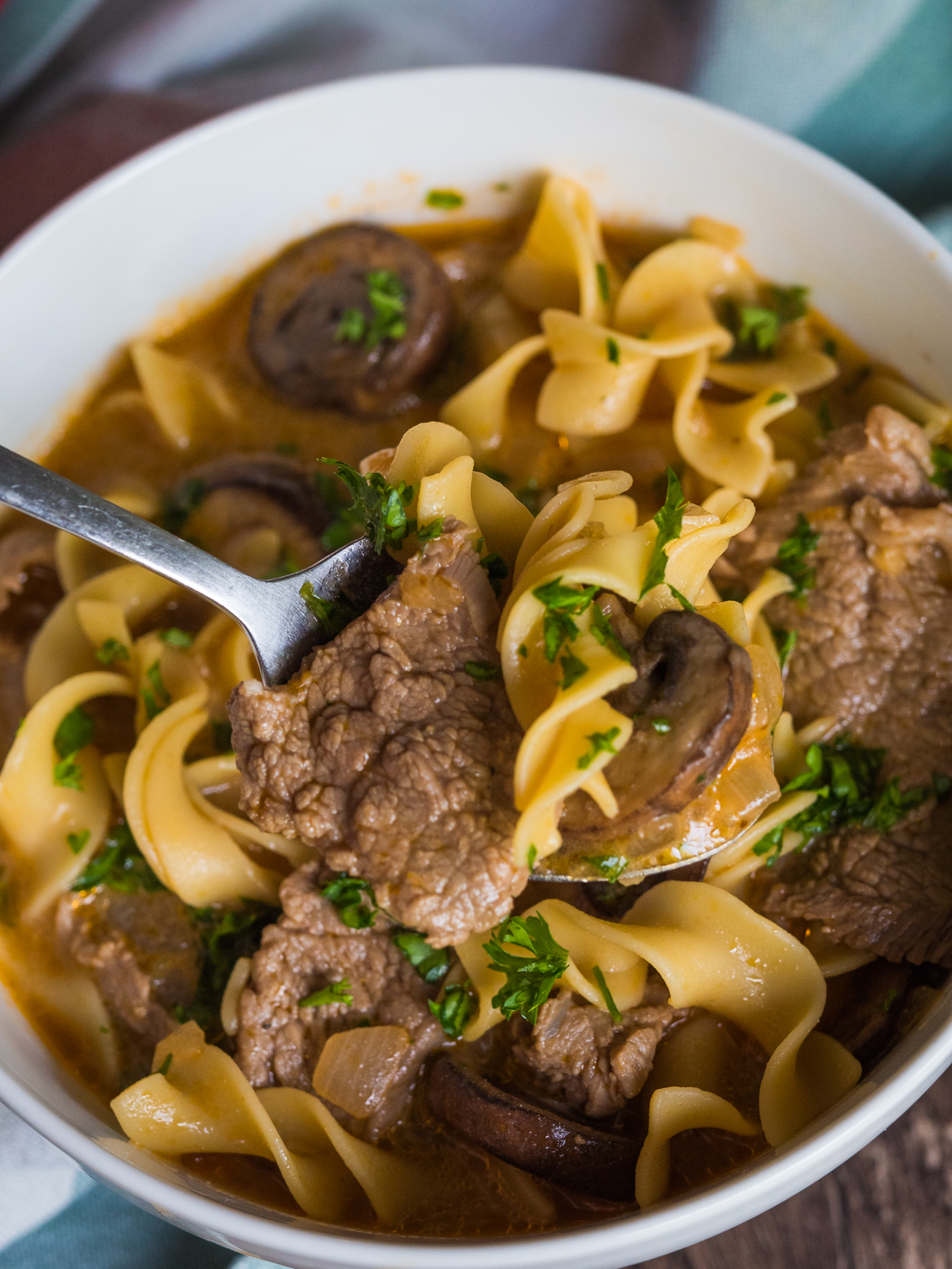 There’s a lot you’re used to here. After all, it’s a bowl of tender beef backed up by that sour cream tang that’s singular to stroganoff, but in this case, instead of serving it over a bed of plain noodles, they mingle with them in a savory broth that ties everything together in a most comforting way. 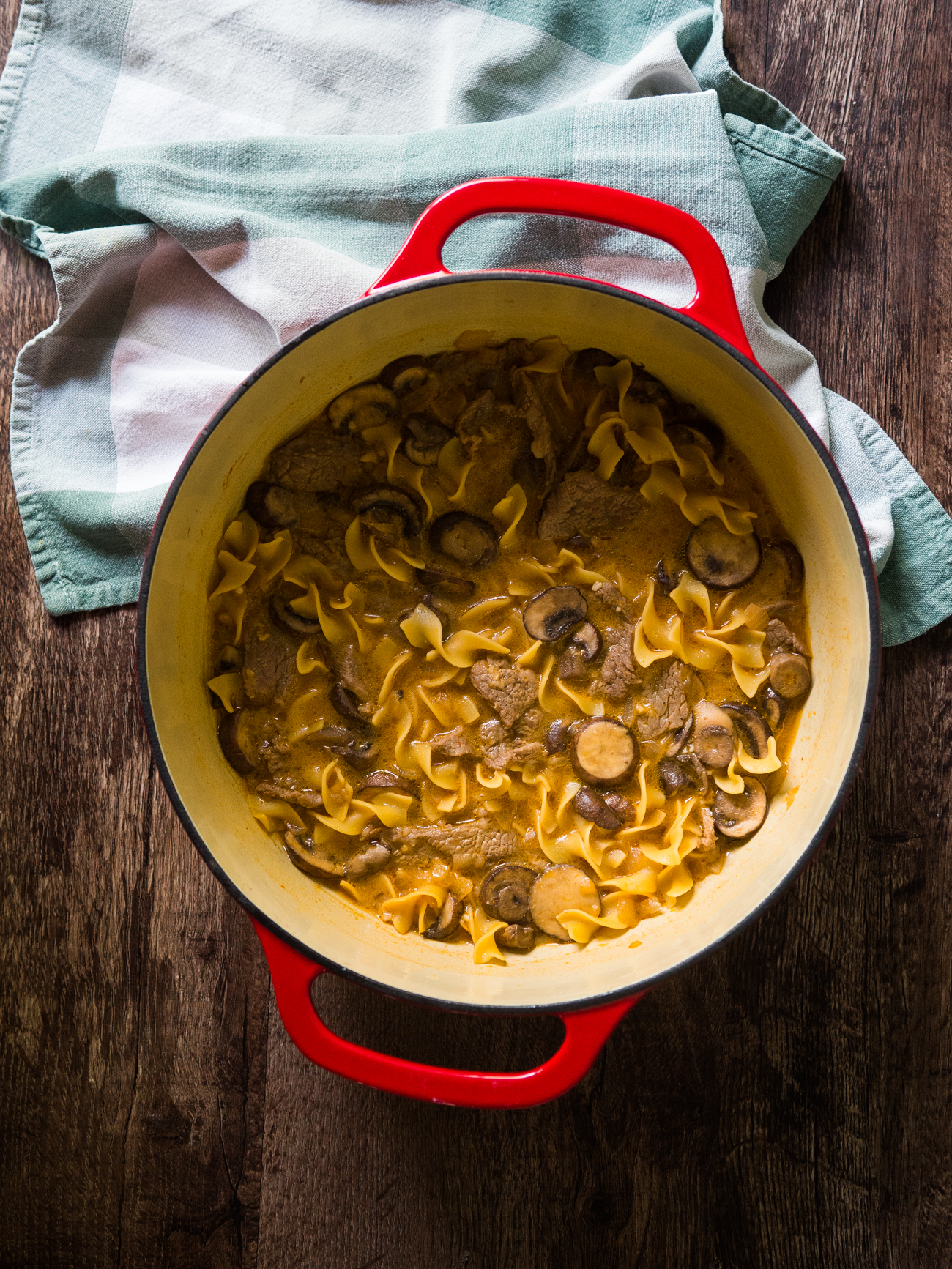